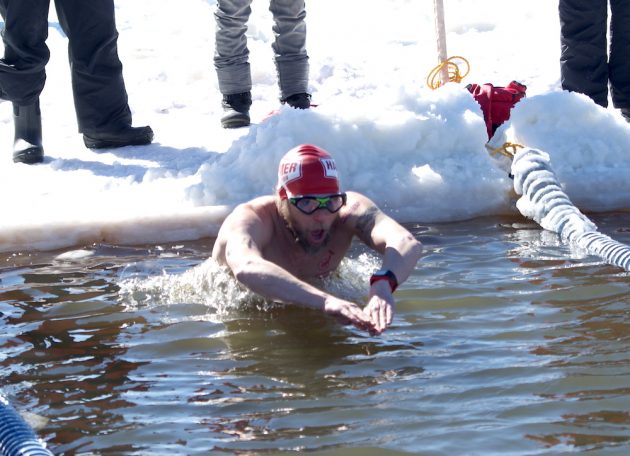 As I entered the frigid water, terror began to creep in. Every muscle in my body began to contract as I tensed up in anticipation of the cold. Even before I submerged myself, I couldn’t breathe. My heart rate rose. My body began to shiver violently. My mind began to fight me. You can’t do this; you are out of your mind! Get out of the water! NOW!

My friends, Anders Jakobsson and his girlfriend Amy Bass, watched from shore intently, looking for signs of distress. Anders is an accomplished marathon open water and ice swimmer. Amy is an Occupational Therapist with medical training. That was very reassuring as this was my first time in such cold water. The water temperature was about 47 degrees. I was in full wetsuit, neoprene booties, neoprene cap, and gloves.

The water was shockingly cold. The feeling is beyond description; it is not just cold, it is intensely painful. It is a battle of your mind against your body. 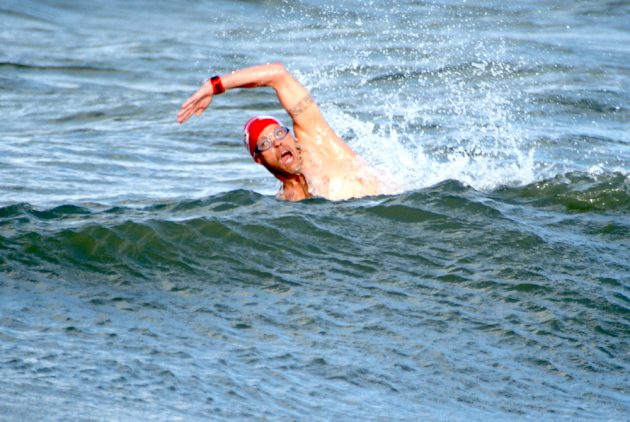 Then, it was Anders who got into the biting cold of Chesapeake Bay. He wore only a swim cap, a standard swimsuit and a pair of goggles. He walked into the water confidently, splashed water on his face and neck then he began to swim. His strokes were quick and sure as he adjusted to the cold water and got into a rhythm. As we walked the beach, we followed Anders as he swam. Amy is ever watchful of Anders in the water looking for signs of distress. Watching his stroke count and any behavior that showing he is disoriented or confused.

I had the opportunity to ask Dr. N. Michael Baddar from I&O Medical about the physical effects of swimming in such cold water. “In hypothermia, a lot of the symptoms that patients develop are about the body trying to preserve heat. One of the biggest problems is mental confusion which often makes them do things that actually increase the loss of body heat and puts them at greater risk.” An example of this is a climber on Mt. Everest suddenly taking of all his clothes. Heat loss occurs more rapidly in the water than the air, making swimming in bitterly cold temperatures extremely dangerous. It should only be done by a trained athlete with medical personnel nearby and at the ready.”

A native of Sweden, Anders was a rescue swimmer for the US Navy. He has swum in some of the roughest conditions in the world. The most beautiful was the crystal clear water of Iceland. The roughest water, none other than the Black Sea where he faced 15-foot waves.

Anders seeks out physical tests of endurance that most people simply cannot fathom. He swims in water so cold it can kill you in a matter of minutes. He has trained his body to endure the pain of ice swimming. Anders told me that it feels like fire on every inch of his skin. “Once you get past the first 3 or 4 minutes, your body goes numb”, “you just have to tough it out and wait for the pain to pass” he said with a huge smile on his face. Anders is a very warm and welcoming person. His smile is infectious and he can get the most steadfast warm water swimmers to try a cold-water swim.

Anders is currently training for an English Channel crossing in September of 2018.

Anders has spent his life in preparation of tackling one of the most physically and mentally difficult feats in the world. It has been called the Mt. Everest of open water swimming. However, only a handful over 1,700 people has ever successfully completed a solo English Channel crossing. Over 7,000 have summited Mt. Everest to put it into perspective.

Swimmers have died while attempting a channel crossing. Nine swimmers have lost their lives trying to achieve their dream. One of them being so close to finishing, she could see the beautiful white cliffs of Dover.

Over 90% of the swimmers that attempt the crossing do not make it. The current is so strong at the end of that epic swim and many swimmers just cannot break through. Swimmers train for years in preparation. The warmest the water in the channel reaches is 65F. Wetsuits are not allowed. You can only wear a standard swimsuit, swim cap and goggles.

The shortest distance for an English Channel crossing is 21 miles.  Once you factor in current and drift, some swimmers swim as far as 26 miles.

“Pain and the cold is something I have learned a lot about these past few years. What a “normal” person would say is cold or pain is not it! A body can withstand a lot if you teach your mind to do it. Swimming in 30-degree water hurts, but so does 50-degree water. If you have never been in 50-degree water it can kill you very fast. Now for me, I would love to swim in 50-degree water. That’s a bath. Why do I do it? Why not! It’s a challenge to see what your body can do. How many people can swim for 12+ hours? The pain in your shoulders and back is something you can’t explain. It goes beyond pain. The only thing I think about is standing on that beach again.” Anders said.

An English Channel crossing is not a cheap endeavor.  Supplements, airplane tickets, escort boats, hotel, and food are just a few of the costs involved. Anders is sponsored by Hammer Nutrition, maker of Perpetuem, the drink of choice for open water swimmers. Anders is currently seeking additional sponsors. He is a very visible athlete and anyone that puts their name on him will have countless PR opportunities.

Anders has a Go Fund Me page to raise money for his Channel Crossing. You cannot put a price on someone’s dream! If you would like to help get Anders to the white cliffs of Dover your contribution is welcome at www.gofundme.com/swedishswimmer