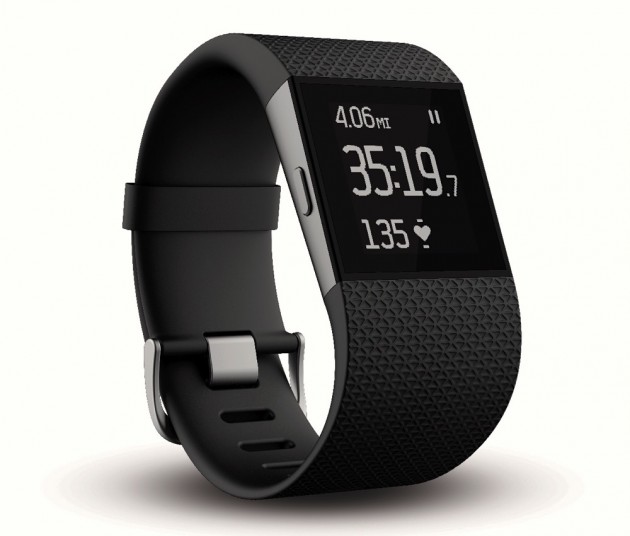 When I started training for iron distance triathlons over a decade ago, I trained by heart rate. Over time I used heart rate monitors from Nike and Timex. Both required use of a chest strap with reasonably small watches, which was important to me because I liked to run as light as possible— no cell phone, food, or even a water bottle. Extra gear would so disrupt my mojo that I would often plan runs around water fountain locations just so I did not have to carry a water bottle. When GPS watches came around, I simply was not interested due to their bulky size. By that time, I had also given up wearing a heart rate monitor. I had tested and re-tested to establish my heart rate zones a few times already and had spent so much time training in specific zones, I knew by feel each zone. I have to admit that the whole GPS watch thing simply passed me by. My trusty training tool was a simple 30-lap Timex Ironman watch.

So, when Fitbit contacted me to test out their Fitbit Surge at a swanky resort in San Francisco with a few other health and endurance sports journalists, I have to admit, I was more interested in the trip than the watch. In full disclosure, the cost of the trip and Fitbit Surge was covered by the company. However, they were more interested in feedback on the watch than a review. After using the watch for a few months, I have developed some strong opinions about it and would like to share them with you.

First off, over the years, I did get used to carrying gear on a run when I went through my “Insta-Runner” phase of Instagraming things I saw when running. By consequence, I started using Map My Run to track my training. Still, carrying a phone was a bit of an inconvenience and I’m just not the type of person to run with a phone in an arm strap. So, as phones got bigger, my days of carrying one with me on a run ended. In addition, I still found GPS watches to be a bit bulky for my wrist. My first impression of the Fitbit Surge was that it was about the size of a regular man’s watch— I’d say on the small size for a GPS watch. The Fitbit Surge comes in Small, Large or Extra Large sizes but, that’s just the wrist band. The size of the watch is the same for men and women. For me, the size of the watch is something I could stand to wear every day, which I have.

The wrist band size is important because the Fitbit Surge is also a heart rate monitor that finds your heart rate through an optical sensor which must be snug on your wrist. On our test run in San Francisco, the Fitbit people recommended wearing the watch about an inch or two higher on the wrist to ensure a good reading. That felt really awkward for me, so I wore it as I would a normal watch and haven’t had any problems. They also suggested that hairy arms might interfere with the heart rate signal. I haven’t found that to be a problem either.

Throughout that initial run, I had good consistent readings (the Surge tracks heart rate continually unlike the Apple watch which does so at certain intervals) not too mention a pretty quick pick-up of my location with the GPS feature. The screen is a little bit dark but, it has a decent backlight which does a much better job in the dark than I initially thought. As I mentioned, I’m pretty in tune to my heart rate and found it to be close enough for my need of accuracy. 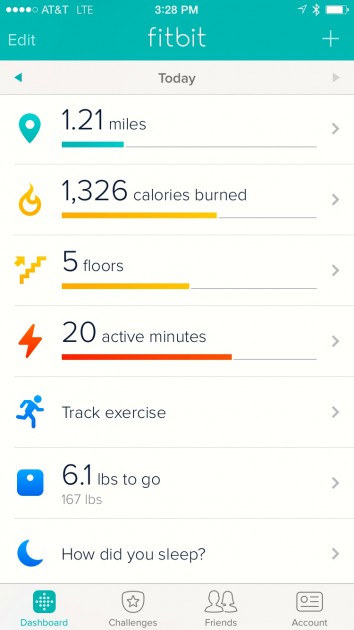 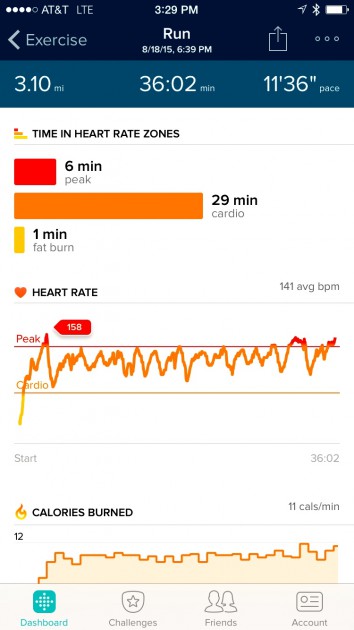 What is really cool about the Fitbit Surge is the cell phone App. The watch itself is pretty basic in appearance and performance. It tracks and provides basic feedback (time, distance, heart rate, and even text notifications from your phone) when running or exercising then sends all the data to an App on your phone. The App was super easy to setup and sync’s automatically with the watch without me having to do anything. That’s really important because I’m lazy when it comes to things like that. Silly, I know but, that’s just me. The interface itself is super clean and easy to read. The graphs are outstanding. What I found most impressive, however, was its sleep tracking functionality. Without digging into how it works, its pretty darn accurate in knowing when I sleep and get up. I think I’m like most endurance athletes with a career and family who sacrifice sleep for training time. The Fitbit Surge allows me to track my sleep and set goals to increase my sleep time. For this alone, I would recommend the Fitbit Surge to anyone.

What I don’t like about the App, however, is Fitbit’s choice of heart rate zone. If you are a triathlete, runner or cyclist you probably train based on five different zones, maybe even one or two more than that. Unfortunately, Fitbit’s training zones are simply “Fat Burn” (50-69% max heart rate), “Cardio” (70-84% max heart rate) and “Peak” (greater than 85% max heart rate). Fitbit wasn’t exactly clear on who their target audience is for the Surge but, given the company I was in, which included Dean Karnazes, it was pretty evident the audience was endurance athletes. Not having the five basic heart rate zones or the ability to set your own max heart rate (it uses the 220 minus your age formula) is a clear miss for this audience.

The initial product testing of the Surge included another clear miss— not including the ability to track cycling. Fitbit fixed this for the initial release but, had to put “Cycling” under its “Exercise” category rather than make it its own category, like “Running”. The cycling tracker works completely fine and I use it often. It’s just a personal peeve of mine to have to scroll through all the exercises to get to it (like I said, I’m lazy about stuff like that.)

The biggest miss I see with the Surge is whether or not it’s water proof. One of the Fitbit representatives we met was a triathlete who swam with his Surge. Another Fitbit representative said that was definitely not recommended. I know a few people who have tested the waters here so to speak and the watch was fine. I don’t feel I’m that lucky so, I have not worn it in the water. If you remember, I’m a bit lazy, so it’s very bothersome for me to take my watch off when doing a swim-run or swim-bike brick or simply swimming after lifting weights, which I am known to do. But, the reason this is a huge miss on Fitbit’s part is that the water proofing issue basically eliminates the Surge as a race day watch for triathletes not willing to risk damaging a $250 watch. Personally, I am simply not going to take the time to put it back on my wrist after the swim portion of a triathlon— time in transition is too critical.

I do consider myself more of a triathlete as a runner, so you might expect that I’ve tossed the Fitbit Surge aside given the issues I highlighted. Well, if you remember, I mentioned earlier that I’ve worn the watch every day I’ve had it. Truth is, despite it’s shortcomings, I really do like this watch. If you’re a data freak, you probably won’t. But, I’ve been doing this triathlon thing for so long I can get over not having a graph showing me when I’m in Zone 4 or 5. I know my zones and use the heart rate on the watch to regulate my training. Plus, I’m super impressed with the sleep tracking and goal-setting. Getting enough sleep is an ongoing issue for me as I’m sure it is for other mom and dad endurance athletes with full-time jobs. I really don’t want to take this watch off— awake or asleep which, unfortunately brings to a head the water proofing issue. That part is definitely a bummer for me but, if you’re a runner who wants GPS functionality in a heart rate monitor, I don’t see why you wouldn’t want a Fitbit Surge.