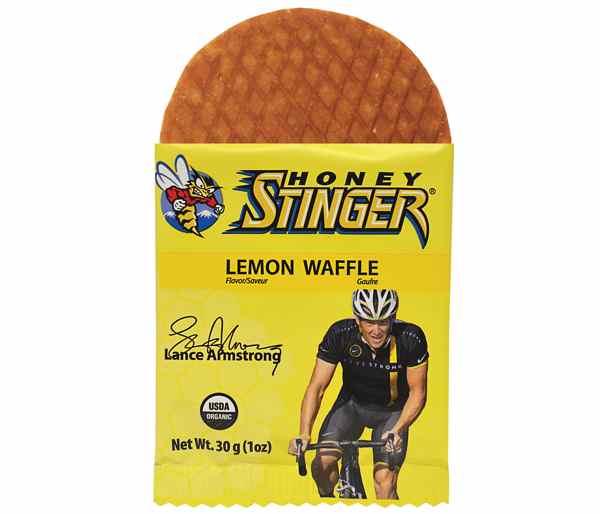 Waffles are not commonly handed out at bike aid stations during long triathlons or century rides. Yet, the thought is somewhat appealing. Who doesn’t like waffles … and they do have carbs, right? I have found myself devouring some waffles that were left over from the kids’ breakfast as I changed from my bike to run gear on Sundays. They were yummy, easy to eat, and filling, especially with some peanut butter. Based on similar products that are popular in Europe among professional cyclists, and galvanized by Lance Armstrong, who bought stock in the company, Honey Stinger decided to make their own version of a waffle-type snack, geared toward endurance athletes.

These days we can consume energy “foods” in a variety of forms, including gels, liquids, bars, chewy blocks, and even jelly beans. So it is not surprising that the search for diversity and efficiency in digestion continues to produce new products. Honey Stinger, although not as well known as Powerbar, Gu, or Clif, has been producing energy foods for half a decade. In 1954, a beekeeper named Ralph Gamber created a healthy snack called EN-R-G Bar. He also produced simple “quick energy” packs of honey. The success was modest and the honey-based energy product line only gained notoriety and achieved mass production 50 years later, when a group including the Gambers’ son and grandson founded Honey Stinger. The company continued to focus on producing honey-based products made from natural ingredients, and expanded their product line to include better packaged gels, different forms of bars, chews, and most recently, waffles.

Each Honey Stinger Organic Waffle offers 160 calories (per one-waffle serving). As expected, it consists mostly of carbohydrates (19 grams), as well as 9 grams of fat and 1 gram of protein. This is somewhat consistent with other common energy foods designed to be ingested before or during workouts, such as a Powergels, which consist of 27 grams of carbohydrates, 0 grams of fat and 0 grams of protein for 110 calories. Honey Stinger advertises that they are made with USDA certified organic ingredients. According to the USDA website, “Organic is a labeling term that indicates that the food or other agricultural product has been produced through approved methods that integrate cultural, biological, and mechanical practices that foster cycling of resources, promote ecological balance, and conserve biodiversity. Synthetic fertilizers, sewage sludge, irradiation, and genetic engineering may not be used.” In order to receive the USDA Organic seal, third-party agents have to certify that the processes, production, handling, and operations used meet USDA Organic standards. The Honey Stinger Waffles are available in five flavors: honey, vanilla, lemon, chocolate, and Sstrawberry.

I liked the taste of the Honey Stinger Waffles from the first bite. They have a definite “honeyish” taste but the different flavors add variety and more distinctive tastes. My favorites are the strawberry and vanilla flavors, which are generally my favorite ice cream flavors as well. For the record, my 9- and 11-year-old kids also love them, which is not always the case with other energy food products. They have a waffle feel and coloring, but they are a little more like a cookie than a fluffy waffle. The consistency is a little crunchy yet moist, while easily breaking into bite-size pieces. Eating them during a ride brought back memories of riding my bike in the ’80s, when we used to pack Pop Tarts as energy food, since they were tasty, high on sugar, and easy to carry. Like Pop Tarts, the Honey Stingers fit easily into a bike jersey pocket, but unlike the Pop Tarts’ double pack, these are individually wrapped. This is definitely a plus; I rarely eat more than one at a time so there is no re-wrapping involved.  Similar to Pop Tarts, the Honey Stinger Waffles do break apart if they are not handled with some care. However, unlike Pop tarts, they break into a few chunks as opposed to a million crumbs.

Another appealing feature of the Honey Stinger Waffles is that they offer a form of solid energy food that is still easy to chew and digest. I found during Ironman races and long rides, that after three hours of consuming gel and liquid energy products, I started to crave something solid. Bars tended to be harder to chew and often caused GI problems. Peanut butter and honey sandwiches worked well in the past but inconveniently had to be prepared ahead of time. The Honey Stinger Waffles were a great substitute. I just had to eat a few more of them, which was not a problem for me. Yeah, I can gulp down a gel packet quicker and easier than I can eat a Honey Stinger Waffle, but the latter is often significantly more satisfying.

The Honey Stinger products gained momentum earlier this year when Lance Armstrong started endorsing it while posting incredible results in the triathlon circuit. In fact, the wrappers of the waffle still display Lance on a bike next to his name and signature. My hope is that the current divisive environment surrounding his name does not put a cloud over this great product.

Cid Cardoso, Jr., owner of Inside Out Sports, has been doing triathlons for more than 20 years. In October 2011, he competed in his 26th Ironman – his eighth appearance at Kona. A veteran of ultramarathons, he has competed in Team RAAM twice. He has seen equipment evolve with the sport and continues to test new products to assess their impact on performance. He trains, works, and resides in Cary with his wife, two daughters, and son. You can reach him at  cidjr@insideoutsports.com.