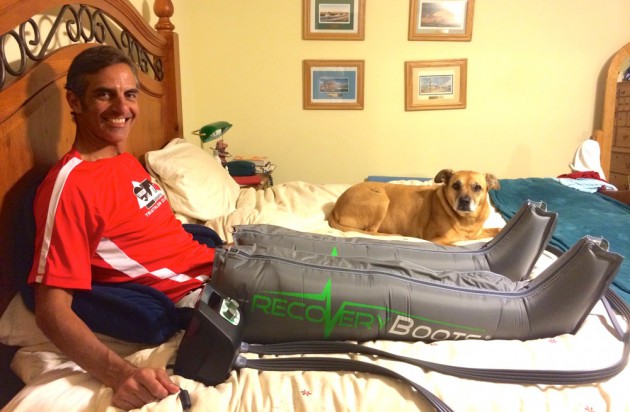 What runner, cyclist or triathlete doesn’t like a post race leg massage? The massage often produces immediate pain relief but more importantly, it reduces longer term muscle stiffness and fatigue which will allow the athlete to resume intense exercise sooner. It is proven that post exercise massage increases the “recovery” in muscles and thus shortens the recovery time. So unless one lives with a massage therapist or has an unlimited budget (and time), getting a massage two to three times per week is just not realistic. The next best thing is the RP Recovery System by RecoveryPump®.

By now most people have seen pictures of professional athletes lounging with a pair of inflatable full leg  boots connected to hoses that look like something out of a sci-fi movie. These hoses connect to a small pump and the boots, in this case called RecoveryBoots®, inflate when the pump is turned on, providing muscle compression. This works much like a blood pressure checking machine in a doctor’s office but bigger and more powerful.  In order to achieve the active compression, which is paramount to expediting recovery, the system inflates the boot gradually, chamber by chamber in a progressive way. It inflates the bottom sections first, by the feet, and gradually work their way up the leg until the entire boot is full of air and all the muscles are being compressed. After a few seconds, air is released, the compression dissipates and the process begins again. This is essentially called sequential compression and according to RecoveryPump®, was first developed as therapy to hospital patients suffering from arterial diseases, lymphoma and other forms of circulatory problems like diabetes.

RecoveryPump® explains on their website how after intense exercise, an athlete often experiences pain and fatigue in the muscle due to micro damage in the cells of the muscle. This then leads to the accumulation of lactic acid and other metabolic waste. The body (lymphatic system and blood vessels) can eventually flush such waste through muscle movement but that takes time. And until such waste is eliminated, performance is hindered as muscles feel fatigued and blah (somewhat unresponsive and heavy). The RP Recovery System can expedite this process significantly through active recovery, which stimulates the muscles and help flush out the waste quicker. In fact, RecoveryPump® claims that the sequential compression it provides can increase the rate of muscle recovery to 1-2 hours compared to what the body would normally take 12 – 48 hours unassisted.

I first tried the RP Recovery System at Ironman Louisville a few years back. I was working at the Ironman expo and racing so after significant time on my feet I would stop by the RecoveryPump® booth at the end of the day and get the sequential compression treatment for 20-30 minutes. I eventually had a good race so like any athlete; I associated this pre race ritual to the successful result. During this past month I’ve had a chance to use the RP Recovery System on a more consistent basis. I found it quite helpful in accelerating recovery, especially after the hard days. In fact, the compression provided felt so good on tired legs that using them became kind of addictive. Putting them on for 30 minutes became part of my end of day routine. Like a massage, not only I enjoyed the immediate sensation of relief on the tired muscles but I actually felt that I was able to train hard again the next day. I’m sure some of this feeling of quick recovery was in my head but hey, that still counts.

The RP Recovery System, which included the pump, a set of RecoveryBoots® and integrated hoses is super easy to assemble and simple to use. Basically, one just has to plug the pump into the wall, connect the hoses to the pump, put on the RecoveryBoots® (which are easy to do due to a  long zipper that runs the entire length of the boots) select the time and amount of pressure desired and press start. The system also folds down and fits in astonishingly small duffel, making it easy to carry, store and to travel with.  The folding of the boots though is not as immediate and easy as I would like. Folding them requires the air to be completely removed, and like an air mattress, this takes a little work and time. To the dismay of my wife, I eventually stopped trying to fold them neatly at night and have gotten in the habit of tucking them away unfolded in a corner of the room or under the bed.

I have been using the RP Recovery System, which delivers a single type of sequential compression with a 15 second pause and a 4 second hold in the last chamber.  The amount of compression and the duration of the session are still variable, as previously mentioned. A more expensive digital version called the RPX Recovery System offers more options in the pause (10-60 seconds) and hold (0-10 seconds) features and comes with different custom programs designated as Recovery, Pre Train and Isolate. The boot itself comes in 4 different sizes and other “recovery garments” such as “core” and “arms” are available as well.

Overall the RP Recovery System by RecoveryPump® is a unique product that brings an aspect of athletic recovery that was previously only available to professional athletes to the rest of us. Although is still not cheap, in the realm of high end triathlon equipment, it is not outrageously expensive either. In my opinion the RP Recovery System delivers what it promises: quicker recovery. As a result it can be a valuable tool for an athlete to use during his or her intense training regimen.

Cid Cardoso, Jr., owner of Inside Out Sports, has been doing triathlons for more than 20 years. In October 2011, he competed in his 26th Ironman – his eighth appearance at Kona. A veteran of ultramarathons, he has competed in Team RAAM twice. He has seen equipment evolve with the sport and continues to test new products to assess their impact on performance. He trains, works, and resides in Cary with his wife, two daughters, and son. You can reach him at  cidjr@insideoutsports.com.