SUSTAINABILITY OF YOU – CrossFit for the Endurance Athlete

SUSTAINABILITY OF YOU – CrossFit for the Endurance Athlete 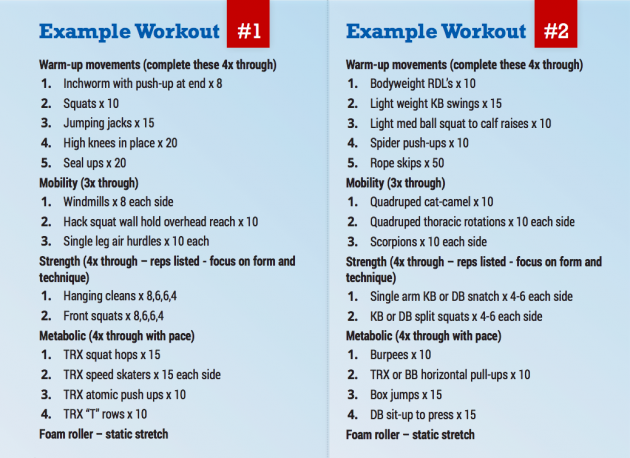 Around this time of year is when I am always asked the question of what exercises for strength and prevention of injury should I be doing as an endurance athlete. For the past three years I have written workouts to follow (they can be found in the archive or on our YouTube channel – activedgefit). Recently, as the fad has peaked, several have asked about whether or not the CrossFit-style exercises and workouts would be beneficial to them.

While the winter “off-season” is indeed a great time to add resistive exercises to your routine, you need to first ask yourself the question of what you want to accomplish. The answer for several of you will most likely be to make you a stronger athlete and one that is less prone to injury. Some of you might actually be working on physiological deficits and rehabilitation from a current or acute injury. The first step before beginning your training should be to have an evaluation by a trainer or physical therapist trained in Functional Movement Screening. Combined with your personal goals and the results of the screen that should dictate the direction you should start.

In most cases, endurance athletes never fully take an extended time off their respective sport. I do suggest at least a full week or two of no structured workouts to give the body a break, but after that, most athletes and the plans that they are following will continue to have workouts throughout the winter. Taking these workouts into consideration, you should build your resistive goals around them.

That leads us to the question about CrossFit-style exercises. Many of the compound movements and Olympic lifts that are used are, in theory, excellent functional movements. The ironic thing is that when a recent study looked at several of the top level CrossFit athletes they found that one of their legs was on average over 65% stronger than the other leg. One would think this would be the dexterity dominant side, but what they found upon further evaluation was that they tended to always use a certain split stance favoring one side or the other whenever they did overhead presses and snatches. Basically, even though they were doing a compound functional movement, they weren’t balanced in their application and were in fact contributing to physiological imbalances creating a more injury prone environment.

To counter this phemnomenon, when doing the CrossFit-style movements and Olympic lifts, the athlete should be more conscious of alternating the split stance and perhaps even moving the weaker side into a position that requires greater use to catch up with the stronger side. Be careful when doing this and make sure your trainer or coach is around because if you’re used to only snatching and overhead pressing with the left foot forward and you force yourself to switch to the right foot forward, not only will you be weaker and need to lower the weight, but the mechanics of the movement may not be as fluid. Once you take the time to make these corrections during your workout though, your strength gains and physiological balance should make better progress.

As a physical therapist and triathlete myself, I have no problem with adding the Olympic lifts as described above. I routinely add them to my own workout and they help with strength especially in the “off-season”. The other variable that is often addressed in CrossFit-style workouts is muscle endurance or metabolic conditioning. Obviously, this is of particular interest to runners, cyclists, swimmers, rowers, duathletes, and triathletes since they need to be just as strong at the end of their event as the beginning. Since most of you have interval training already built into your workouts I wouldn’t go overkill on this part. There is no need to do 400 wall balls or 300 thrusters for time. There are way more bad things and potential faults that can come from this than good and just not worth it in my opinion. Now, there are several other Tabata-timed and AMRAP (As Many Rounds/Reps As Possible) series that are of benefit. Again, make sure you don’t sacrifice form and proper technique for speed and chose exercises that addresses many of the problems found in the Functional Movement Screen.

Having reviewed some components that frequently pop-up in WODs and workouts in boxes around the country, I now want to lay out what I envision an ideal endurance workout to look like for strengthening and injury prevention. First, you should have ample warm-up using movements with just body weight or light resistance addressing all body parts. Second, move into the mobility stage. Once the body is warm, focus on getting rotation in the spine and mobility in the hips and shoulders that allow for more efficient movement. Third, this is strength component. This is where the compound movements and Olympic lifts may make an appearance. Reps are low and focus is on form and technique. Lastly, add the metabolic conditioning. As described above, pick exercises that address weaknesses and positional faults in physiology. Make sure you don’t rush into bad technique or favor one side or the other as you fatigue. Muscle endurance is important so don’t take this lightly.

This entire workout should take less than 45 mins once you get the movements down. See the examples that can be spaced throughout your week and go to our YouTube channel for demos. I don’t like to design strength workouts that are too much longer than that for endurance athletes because most find it difficult to fit in to their already rigorous demands of programming. Following the workout, finish with some stretching and/or foam roller for about 10-15 mins either right after the workout or in the evening before bed if crunched for time.

Brian Diaz is the head physical therapist and sports specialist at ActivEdge Fitness & Sports Performance. He is a Level II Certified TRX Suspension Trainer and a USA Triathlon Certified Coach. Follow him on Twitter (@JediTriathlete) or go to his website at ExperienceTheEdge.com for more exercise ideas.