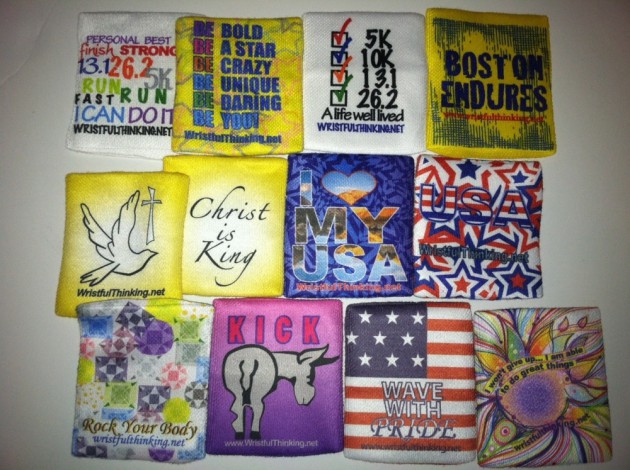 Normally I review products that claim clear performance benefits, often by reducing drag or weight, or by increasing shock absorption, or even facilitating quicker recovery. I do so generally not only because as an athlete who still wants to compete, saving time and going faster is a priority, but because I like to rely on empirical testing and consider specific and well-defined metrics.

However, there are products out there that can offer other benefits, such as inspiration, which is less measurable and yet often more significant in boosting performance. I bet that the right motivation and inspiration will make an athlete race far faster than those internally routed cables that tested so well in the wind tunnel and saved the athlete 30 seconds over 100 miles. A few months ago I came across a product whose main goal is to inspire and inform athletes, and it sort of falls into this category:  Wristful Thinking ® Wristbands.

Wristful Thinking ® Wristbands are soft, lightweight, moisture-wicking wristbands that are printed with fun and unique designs, and are fully customizable to offer personalized and inspirational messages as well as logos and event information. They are made right here in North Carolina and the company claims to provide a lower carbon footprint than imported athletic gear. They can be worn over and over again and although instructions recommend hand-washing and line-drying for best results (which is not unusual for performance apparel), I threw my sample in the machines. So far, the band has not fallen apart, faded or bled.

Wristful Thinking ® Wristbands were invented by Brandi Stewart, a fashion designer and avid runner who came across a collapsed runner at mile 10 of a half-marathon and witnessed the crowd’s lack of action and lack of knowledge of what to do. This life-changing experience led Brandi to think of a way to allow runners to carry information, such as what to do in emergency situations such as this. Hence the first Wristful Thinking ® Wristband was produced with Brandi’s artistic and copyrighted interpretation of the American Heart Association’s “Hands Only CPR” instructions on it. The patent-pending wristband then evolved to include a number of popular designs created by Brandi, as well as other informational and promotional messages.

I tried a Wristful Thinking ® Wristband and found it to be comfortable and easy to get used to. I normally don’t like a whole lot of stuff on me as I run. I wear little jewelry and run shirtless whenever possible so I was hesitant to try it. I was thinking that they would have the bulky Jimmy Connors ’70s tennis wristband feel, but that was not the case. They are much lighter and softer. In fact, they are thin enough that they can even be worn under a watch or heart-rate monitor.

I was a little self conscious at first but eventually kind of forgot about it. By my second or third run with it, the band was feeling like any other normal piece of apparel. I even used it successfully to carry a gel pack and can see how it can hold a key, as described by Keene Beene Designs (Brandi’s company) on her website, www.WristfulThinking.net. I’m pretty sure this wristband did not make me run any faster, but it certainly didn’t make me slower either.

In looking over the pre-made designs on the website, I found some neat ones. I liked the “Boston Endures” one as well as the “JUST RUN KEEP GOING” one, which has that message on one side and common split times and corresponding finish times for the half- and full marathon distances on the reverse. As far as the patterned ones, like the gradient zebra or the colorful leopard, I personally would stay away from these designs. Like I said earlier, fashion is not a high priority for me when running or riding (as my wife and daughters can attest). However, I know there are plenty of people who want to look good and accessorize even when running.

For race directors wishing to give participants something a little different from a shirt or a towel, this offers an inexpensive and unique opportunity. For runners fundraising for various causes, these bands offer another option to spread the message and raise money. The customization process and the material allow for even detailed pictures to appear on the wristbands. Delivery time varies from less than two weeks for 100 units to four to six weeks for more than 500 units.

Wristful Thinking ® Wristbands offer a unique medium to inspire and inform people while running and working out. They also offer an inexpensive way for clubs and companies to get their message and logos out to their members and customers. It is certainly not one of those products that I can’t live without. However, the low cost and the customization aspect offer a certain appeal. I’m still not big on running with a wristband, but if a certain message becomes important enough, I will definitely consider it.

Cid Cardoso, Jr., owner of Inside Out Sports, has been doing triathlons for more than 20 years. In October 2011, he competed in his 26th Ironman – his eighth appearance at Kona. A veteran of ultramarathons, he has competed in Team RAAM twice. He has seen equipment evolve with the sport and continues to test new products to assess their impact on performance. He trains, works and resides in Cary with his wife, two daughters, and son. You can reach him at cidjr@insideoutsports.com.