A little more than a year ago, my wife and I joined a new mega gym built less than a mile from our house. While I have always been a runner I have never been much at working out in a gym. Whenever I felt the need to strength train I performed the Marine Corps Daily 7 that served me well while enlisted back in late 80’s and early 90’s. If you’re a fan of F3 or Camp Gladiator or any of the other outdoor boot camp style-training clubs, you’re basically doing a workout they do in the Marine Corps. But, now a year plus into group strength training and yoga at a mega gym I am here to tell you that I have seen some things. 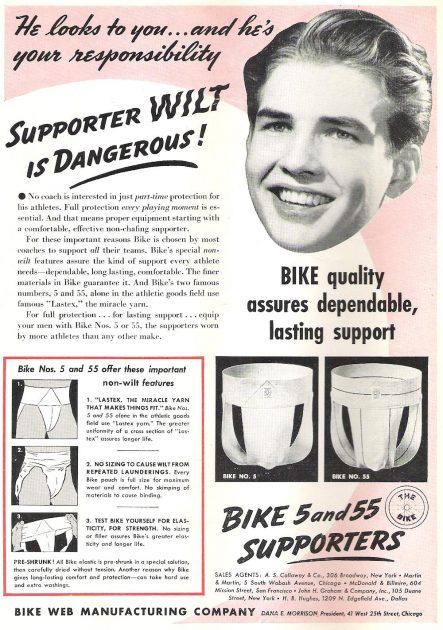 Last week, for instance, I saw a jock strap. Unfortunately, there was an old man in it. Completely unashamed brushing his teeth in nothing but a jock strap and a t-shirt. Listen, I’m all for dental hygiene but, there is process that civilized people follow in regard to brushing teeth in public. It is a process one could argue includes putting pants or shorts on your body before toothpaste on your brush, which brings to point the most disturbing part of this scene — the t-shirt. I can’t imagine a dressing (or undressing) scenario that would leave a person in a t-shirt and jock strap. In terms of dressing the order would be 1) jock strap, 2) shorts, and 3) t-shirt, and then followed by socks and shoes if one were to brush teeth at the gym. Undressing would be 1) t-shirt, 2) shorts, and 3) jock strap, and then followed by a complete re-dressing before teeth brushing, again, if one were compelled to brush teeth at the gym. In either scenario at no point in time would one be caught in a jock strap and t-shirt.

But, let’s get down to the bigger issue at hand here — the jock strap. The jock strap was invented for, get this, cyclists. Not coincidentally, “Bike” was the first brand of jock strap. Back in the late 1800’s when cycling races became popular and Lycra had not yet been invented, the jock strap— sort of like today’s running bra for women— served a real purpose in controlling the jostling of things. Eventually, a jock strap with a pocket for a protective cup was invented for contact sports like football, again, for a real purpose. Then something weird happened. Shortly after the dreaded elementary school Sex Ed talk and movie, boys were ushered into the locker room and required to strip down naked and put on their jock strap to be worn as the only thing underneath gym shorts because if you didn’t, warned the gym teacher, something terrible would happen to your things. And no one wanted that, whatever that was.

What it was, was a strange form of hazing in the weird history of elementary school gym class and all its “crab soccer” type games. I am living proof that you don’t need a jock strap. Having served 6 years in the military immediately after high school I can attest to going “commando” on forced marches, running in basketball shorts with nothing but boxers beneath, and all sorts of other physical activities without the aid of a jock strap. My things have been fine. I have two children as proof. You, however, may still be concerned about the jostling and possible injury to your things, or, maybe you’re into a hot match of crab soccer, in which case I would recommend any number of brands of compression shorts, like a stylish pair of Saxx, which were featured in our “3 Things” column last month. If you are interested in a pair of Saxx, heed my advice and get on the site, make your purchase and move on. I am not responsible for the websites masquerading as men’s underwear companies that come up when Googling “men’s underwear options”. Better yet, get your wife to make this purchase for you. Everyone will be happy.