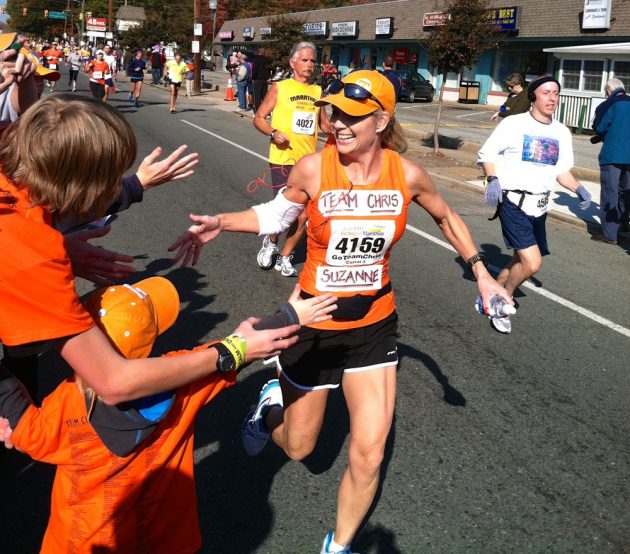 October 23, 2003 forever changed my life in an instant. That was the day we lost the oldest of our six kids in a tragic car accident. Chris was 19. When you suffer the loss of a child, you experience overwhelming emotions that crash over you like a tidal wave. Early in the grieving process, you are forced to make a decision. Are you going to sink or swim? Chris would want me to swim, or in my case… run.

At Chris’ funeral, we learned that he secretly gave $100 to our pastor to buy toys for needy children. We were extremely proud of him, though not shocked by his selfless act of kindness. With the enormity of the situation starting to take over me, I knew I needed to put all my raw emotions into something positive in Chris’ memory. A week after we lost our son, my neighbor ran a marathon. At that moment, I knew that’s what I needed to do, which was a strange thought because I wasn’t a runner. I decided that day to run a marathon to raise money for needy children. “TEAM CHRIS” was founded.

As an active person, I assumed running would come easy to me. I assumed wrong.  Truth was that I could barely run a couple of minutes on a treadmill before needing a walk break. I thought, “What have I gotten myself into? How would I ever be able to run 26.2 miles when I had never even run a 5K?”. Every single step I ran or walked was challenging, but I kept at it for Chris. Every time I ran, the tears rolled down my face as the reality of never being able to see or hug our son, ever again, set in. I figured if I could just run far enough or fast enough, I could outrun the overwhelming grief I was feeling. I couldn’t. Run by run, I laced up my shoes, dreading the thought of another day spent crying on the road. As time went on, I could feel myself getting stronger physically and emotionally with every stride I took. Slowly but surely, my running segments increased and my walk breaks decreased. The next thing I knew, I was running a mile at a time. The stronger my running became; the better I was able to cope with the loss of our son. I had been trying to run away from the pain. Somewhere along the way, I realized I was running through the pain. Now I run to stay strong to honor our son by keeping his memory alive through “TEAM CHRIS”.

One year and many training miles later, I was ready to run my first of many marathons in memory of Chris. My family and friends were there to cheer me on. I thought, “What if I couldn’t finish? What if I failed?” A running friend once told me, “Dig deep even when you think you can’t take another step. Just keep moving forward. Take every step like you mean it, one step at a time”. I trusted that Chris was with me every step of the way… and he was.