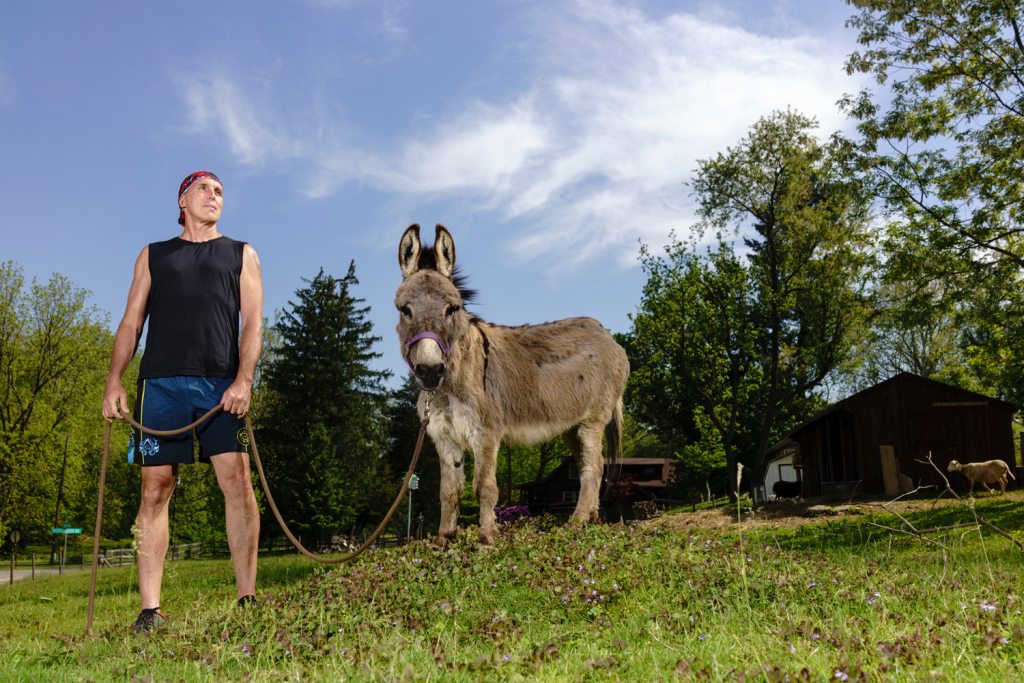 The smart move when your daughter asks for a donkey for her birthday is to just say no. But because she was nine, and easily distractible, and I was sure she’d forget the whole thing by dinner, I opened my mouth and fired a two-syllable mistake into my foot: I said, “Maybe.”

It wasn’t a completely crazy idea; more like 90, 95% crazy. We live deep in Pennsylvania Amish country on a small farm, although we’re not farmers. I spent nearly all my life in Philadelphia and my wife grew up in Hawaii, so cement and sand are our only natural habitats. We moved out here on a whim and instantly loved it. Bit by bit, we began experimenting with livestock, starting with a stray cat and working our way upwards from chickens, to goats, to a pair of sheep, until our youngest daughter popped out with that oddball request. I knew what she was thinking; we’d seen a neighbor riding a cool little saddle donkey named Muffin along a trail in the woods, and everything about Muffin’s kid-friendly size, Bugs Bunny ears, and lovable Eeyore eyes made it seem like the world’s greatest pet. 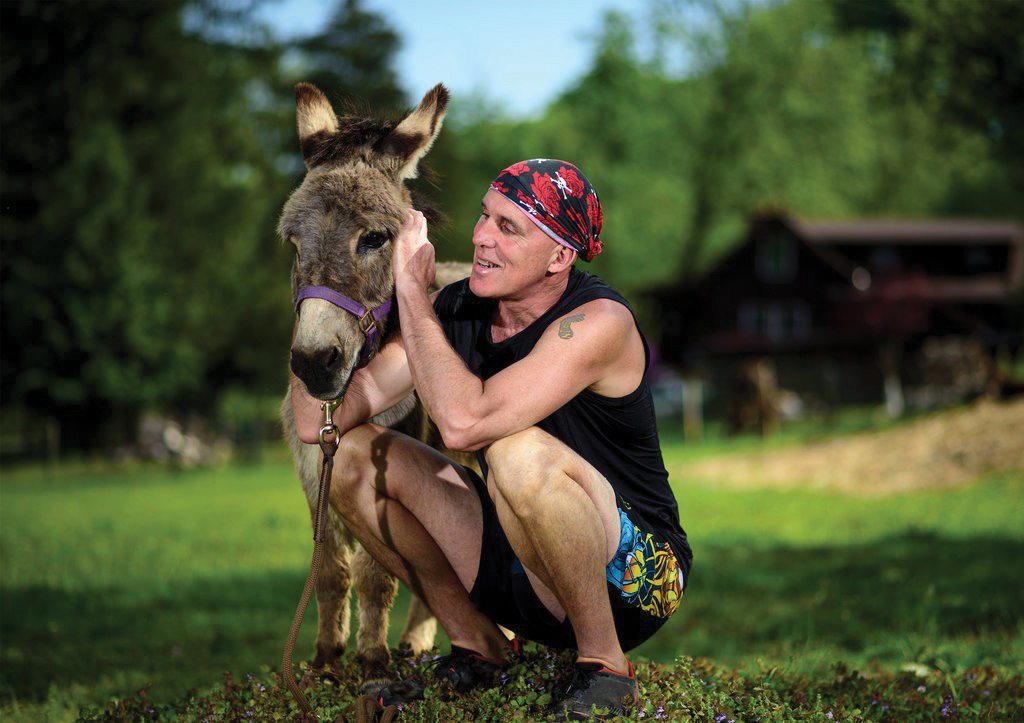 My attempt to follow through on my “Maybe” was pathetic. I barely went through the motions, only bothering to ask a dairy farmer I happened to be chatting with if he knew anyone with a free donkey to give away. I was floored when he immediately replied, “I’m so glad you asked. Yes, I sure do.” It was too late for take-backs, especially when he went on to tell me that he and several other members of his Mennonite church had been struggling for months to persuade a local animal hoarder to give up the goats and donkey he had penned up in a filthy old stall. They’d managed to ease the goats off his hands, but in a truly epic display of irony, the hoarder insisted he would only let go of the donkey if he could personally approve its new home. The donkey was in a horrible situation, the farmer told me; if they could convince the hoarder to give it to me, we’d be saving its life. 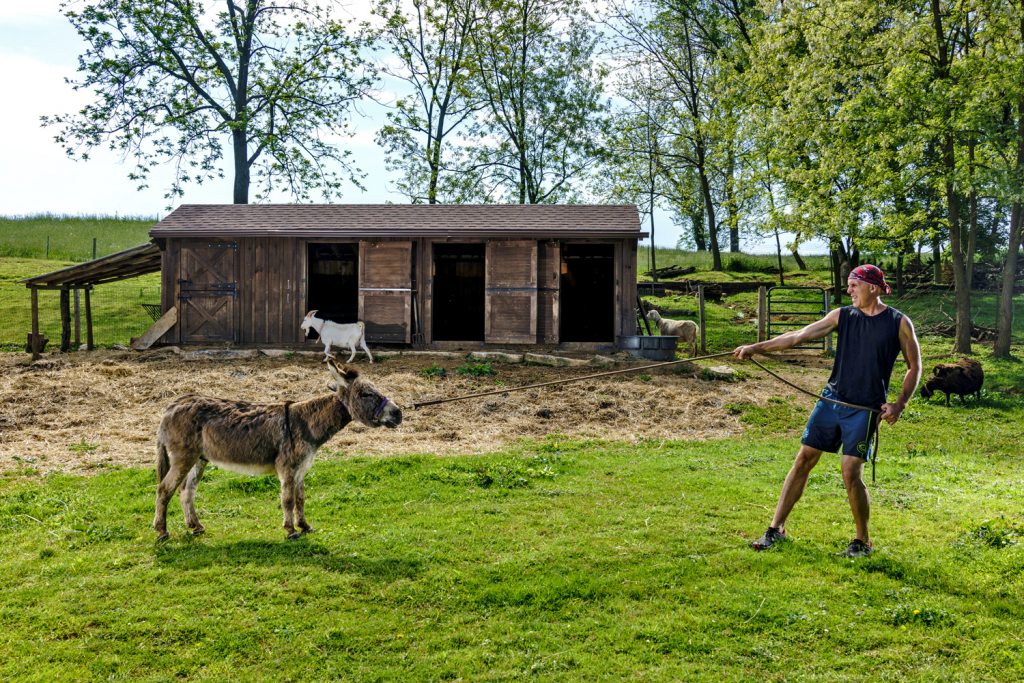 A few days later, a pickup truck pulled up in front of my house and together, the farmer and I struggled to lift a sick, lame animal with repulsive crusted fur and shockingly twisted hooves out of the trailer. For the next few days, we did everything possible to keep him alive. We dosed him with antibiotics, pulled the rotten teeth from his mouth, and sheared the matted manure from his fur. A farrier had to use a hacksaw to cut back the monstrously overgrown hooves so the donkey could even walk. It was touch and go for a while…

But bit by bit, the sad grey donkey began to recover. We named him Sherman, and now that his body was slowly returning to life, it was time worry about his mind. “You can’t just stick him in a field with a bow on his tail,” a neighboring farmer told us. “He’s been neglected, and that can cause despair as deadly as any illness. He needs a reason to live. He needs a job.”

A job? What was I going to do, prospect for gold? Pioneer westward? It sounded ridiculous, until I began to think about a band of burro racers I’d met in Colorado more than ten years ago. Every summer for the past sixty or so years, men and women have lined up with their donkeys to race up and down mountains for distances of up to 30 miles. They don’t ride the animals; they run side-by-side with them as teammates.

Could I could transform this sick, nearly lame donkey into my running partner? Was there any chance we actually train together to compete for the World Championship Pack Burro Race? It was a long shot to begin with, and that was before one calamity after another lowered it to nearly no shot. Nearly — because we kept at it, working to surround Sherman with friends and teach him that the only medicine that could cure him for good was the same one that works for all of us: the more he ran, feeling the sun on his face and his own muscles warming his body from the inside out, the better he’d feel.

Sherman got it — and soon, the adventure that would become Running with Sherman was underway. I was joined by my wife and a friend who was struggling with demons of his own, and together, we became an oddball team of runners who were determined to give Sherman the new life he deserved.

Trained as a foreign correspondent for the Associated Press, Christopher McDougall covered wars in Rwanda and Angola before writing his international bestseller, Born to Run. His beloved New York Times column ahout animal-human partnerships chronicled the beginning of Running with Sherman, while his fascination with the limits of human potential led to his Outside magazine web series, “Art of the Hero.”

To buy the book: www.chrismcdougall.com/running-with-sherman/