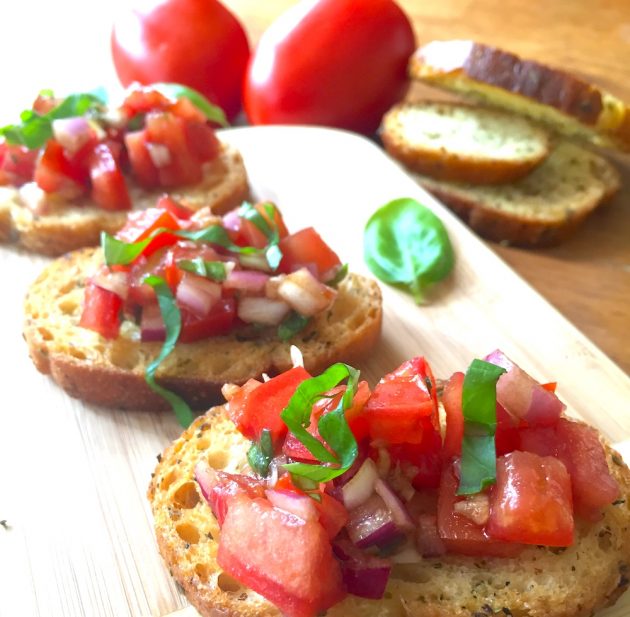 This month’s recipe is a simple procedure for preparing the classic bruschetta. It’s slightly heavy on the balsamic, which adds a bit of sweetness and acidity to contrast the pungency of the garlic and onions. This bruschetta is perfect as a traditional appetizer topped on a toasted baguette or crostini. This low-calorie, nutrient-dense bruschetta also makes for a flawless and flavorful garnish to beans, pastas, salads and more. The recipe makes about 8 half-cup servings.

Perhaps because of our love of pizza and pasta most Americans think of the tomato as something quintessentially Italian. But, the tomato actually originated in South America, where a wild form of it grew in what is now Peru. How and when cultivation of the fruit started is not really known but, generally believed that farming of tomatoes had spread north to what is now Mexico by about 500 B.C. As passionate as we are about tomatoes here in the U.S., it’s ironic that the tomato was not introduced by our next door neighbor to the South but, from Europe. It’s true! To get to the U.S., the tomato took a long circuitous route from Mexico to the Caribbean to Europe in the 1500’s, either by Christopher Columbus or Hernan Cortes after he captured Tenochtitlan (now Mexico City). The tomato thrived in the Mediterranean climate but, it wasn’t widely adopted as a food until the 1700’s. The tomato itself probably arrived in the U.S. via Caribbean immigrants or possibly earlier on 16th and 17th century on Spanish, but was generally thought to be poisonous. Thomas Jefferson discovered a taste for tomatoes in Paris in the 1700’s brought them back to the U.S. to grow as food. It wasn’t for almost another hundred years, however, when Alexander Livingston, a farmer and scientist, bred larger sweeter tomatoes, that the tomato took hold in the North American diet. In the end, it took nearly 500 years for the tomato to cross the Mexican border to arrive in American cuisine.

Brandon McDearis is the owner of Your Way Cuisine, www.yourwaycuisine.com, a personal chef and nutrition consulting business. He is also a professional wanderer that spends much of his year trotting the globe and working in places such as Alaska, Australia, and Antarctica.