Black Men Run: How Lacing Up and Joining a Group Can Save Your Life

Black Men Run: How Lacing Up and Joining a Group Can Save Your Life

Black Men Run started with a simple Facebook post in July 2013 when Jason Russell invited African-American men to join him for a group run. Russell started running back in 2007 after receiving a diagnosis of high cholesterol and high blood pressure. Through running and a healthy diet, he was able to reverse the diseases and hoped that he could help other African American men do the same. He was also inspired by his father, who had run throughout the 1980s, when the black running community was even smaller than it is today. Realizing his dad had always run by himself, he wanted that to be different for a new generation and introduce more black men to distance running.

Today, Black Men Run is represented in 50 cities with a goal of changing the alarming trends of cardiovascular disease and diabetes within the African American community. Among Blacks age 20 and older, 44.4% of men have Cardiovascular Diseases and in 2009, Coronary Heart Disease caused the deaths of 21,051 black males. It’s estimated that blacks have a risk of first-ever stroke that is almost twice that of whites, not to mention that heart disease is the number one cause of death for African American males. Several Black Men groups here in North Carolina are working to do the same, including a chapter in Raleigh/Durham. 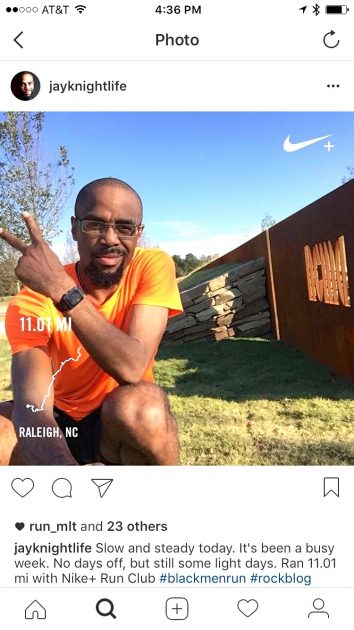 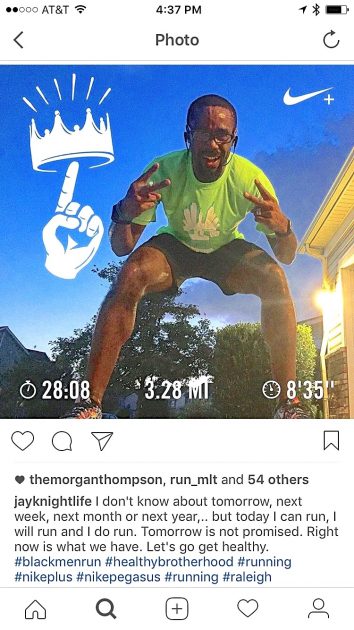 Jason Knight, a Producer for WRAL-TV in Raleigh, has been a member of the Raleigh/Durham chapter since 2014. Like many others, Knight completely stopped exercising after high school. “Aside from the occasional game of basketball, tag football, volleyball or the New Years Resolution run, my commitment was to my family, my church, and my career,” says Knight. It wasn’t until a workplace health assessment revealed that he needed to make some lifestyle changes, including more exercise, that he began to focus on his health.

“I was surprised because I wasn’t considered overweight at all,” says Knight, who immediately went to work on a new lifestyle by joining a group of coworkers who were training for the Jingle Bell Run, though he only had about two weeks to train for the 5K. About a month later, he joined that same group to start training for a half marathon. “I would have four months to train and they claimed it’d be fun,” says Knight. “I signed up for the Inaugural Rock n’ Roll Raleigh half marathon and started my training plan on NikePlus. I’ve been hooked on running ever since.”

After the Rock n’ Roll Raleigh half marathon, Knight was looking for a way to stay active so he started to check out some local run groups. “My first group runs were with this small group at my church. We were all training for a 5k that the church was sponsoring. But it was mostly ladies running,” says Knight. “I was looking  for a group to run with that would help challenge my pace for the next race. I looked on Meetup.com. I went for a trail run with one group but quickly found out that wasn’t for me.”

Knight first heard about Black Men Run through his wife who had heard about Black Girls Run. He looked to see if there was a local chapter of BMR and joined the Raleigh/Durham Facebook group. He went out for his first run with the group, lead by Durham resident Matthew Thompson, at Umstead Park.

“We’ve had some great group runs,” said Knight about the Black Men Run group. “I think I had the most fun recently at the Historic Hillsborough Half. What’s cool about this race is that there are a couple of out and back sections. So, as a BMR member you can see one of those shirts coming for a good 200 meters. So that sets up the high five party line. I think we had 15-20 runners in this race. So, It was fun to encourage each other along the course and then party afterward. The most important part of any run or race is always the groupie! Gotta take a picture then stretch.”

As a Producer for a local television network, Knight isn’t the person behind or in front of the camera lens but, that doesn’t mean he doesn’t have an eye for photography.

“My dad was a pretty good photographer and taught me some things,” says Knight. “After he died, I got his camera. So I took up photography. But soon, the world was switching over to digital cameras. After my son was born I took a lot of pictures. Then I went through a period where I watched a lot of YouTube videos for tips. Who? Mainly Fro Knows photo and the Digital Rev crew. But My New Year’s resolution for one year was to challenge myself with a different picture/photo theme each week. So, after 52 themes I got a little bit better at taking pictures. The selfies that I take are just all in fun. The goal is to focus on what’s around me or to use the tools I have to take the best pic possible. I can’t take a DSLR with me everywhere.”

For his run selfies, Knight uses the Nike Run Club (formerly NikePlus) app to record his pace and distance. While he also uses other apps like the Black Men Run app, Strava, MapMyRun and Garmin, Knight has stuck with Nike Run Club as his “go to” app.

“I stayed with Nike because I had logged so many miles on the app already. I also love the training plans for different race distances. It’ll adapt to your pace and your goals and you can edit your race calendar— move that long run from Sunday to Saturday,” he said. “I like the leaderboard so I can compare myself with other runners. I like the social posts that you can make within the app. I also like the run updates during your run and now Kevin Hart gives me a pep talk after I run! It also links with Nike Training Club app which gives you strength workouts for off days.”

With 16 half marathons and 1,720 running miles in the bucket for 2016, you can imagine that Knight has quite a few run selfies posted on his Instagram account. This year, he plans to run at least two marathons in a time of 4 hrs 30 min or less. First up is the Publix Atlanta Marathon he plans to run as part of a movement that hopes to get a record number of African American runners to finish the race.

His most memorable moment as a runner, though, was not a measure of distance or time. While there have been a lot of good times and great pictures for Knight, he doesn’t need a picture to remember what happened at the end of Race 13.1 in Knoxville, TN.

“That weekend I had planned to run two half’s back to back. One on Saturday, one on Sunday. Sunday was in Nashville for Rock n’ Roll. The other in Knoxville,” added Knight. “At the very end of that last race, I started to cramp up. One runner gave me some of his salt tablets. Then there was a Fleet Feet table where they gave me some Nuun. Then I came around the corner toward to finish line and could hear the music but I couldn’t get my muscles to cooperate. My son jumped out and started running with me. There’s a picture of us with our hands raised in triumph that I keep meaning to purchase. Runners are great people!”

Knight also points out that most of the health issues that plague the African American community can be prevented with proper nutrition and exercise. In fact, he attributes running to saving his life.

“Because of painful issues after a run I went to a doctor and was encouraged to get a colonoscopy— yes at my age, 35! They discovered a precancerous polyp. It was removed without any problems. [The doctor] says if I had waited 5 or 10 years we would be having another more serious conversation,” added Knight. “If putting myself through the pain of running will give me one more year, months or even days with my family,… then it’s all worth it.”

To improve your health and change your life, like Jason Knight, check out the Black Men Run site at http://blkmenrun.com. There are several groups throughout North Carolina.