RUNNING – What Loving a Cyclist Taught Me About Life

RUNNING – What Loving a Cyclist Taught Me About Life

In a few days, I’m getting married. I can hardly believe it’s true – but it is. On May 20th, in a little white chapel – my fiancé and I will promise to love and cherish each other in front of our closest family and friends. 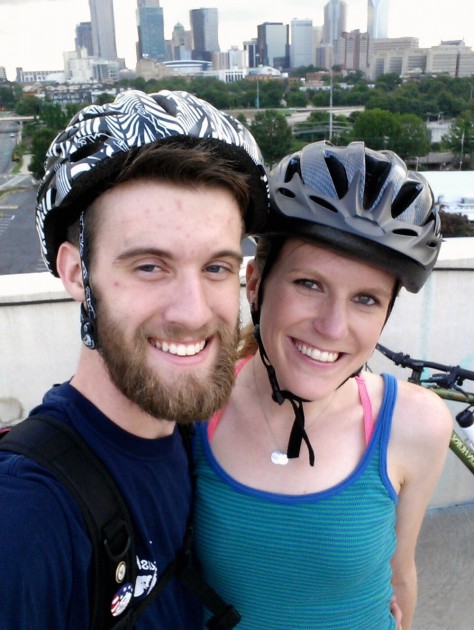 And my fiancé, Tyler, is a cyclist.

Want to know what kind of bike you should buy if you’re just starting out and training for a triathlon? Ask Tyler.

Want to know if your bottom bracket is compatible with your crank set? Tyler’s your guy.

Want to know if you should buy clincher wheels or tubular wheels? He can help you with that too!

Tyler lives, breathes, works with and… well, rides bicycles. Whether we’re sitting on the couch or driving in the car – Tyler’s got bicycles on the brain. And there’s a lot for this runner to learn from her future husband’s passion for two wheels powered by two legs.

When Tyler and I first started dating, I wanted so badly to impress him by “being good” at riding bicycles.  I remember being nervous before the very first ride we ever took together and I remember worrying about whether or not he would think a runner like me was “in shape” enough for him. In the end, I did okay – but, real talk? It was HARD. Sure, aerobically it’s the same fitness – but the mechanics? Totally different. Just because you can charge up a hill on two feet doesn’t mean it automatically translates to being able to charge up a hill on two wheels. It takes work to get comfortable – and good – on a bike. It’s kind of like earning your sea legs – except on a bicycle.

I know that feeling I get (after the nausea and other stomach trauma wears off) after a longgggg run. It’s that feeling of insatiable hunger. I want a burger and French fries and a smoothie and a beer and plantain chips and a seven layer chocolate cake – all at once. This is Tyler after basically every double-digit ride ever. This happens minimally four times each week, which means that my grocery budget will pretty much quadruple after May 20th.  For as much as I eat post-long run, Tyler eats four times that amount post-every ride. I’m not complaining (maybe just a little bit?) – just observing.

Diana Palka is a Charlotte-based writer; runner; lover of grace, craft beer and the well-written. She has an unbreakable rule that there are three things in life you never buy cheap: shoes, beer and toilet paper. When not working as a Marketing / Communication consultant in Corporate America, she writes for kicks and giggles at www.dianapalka.com.