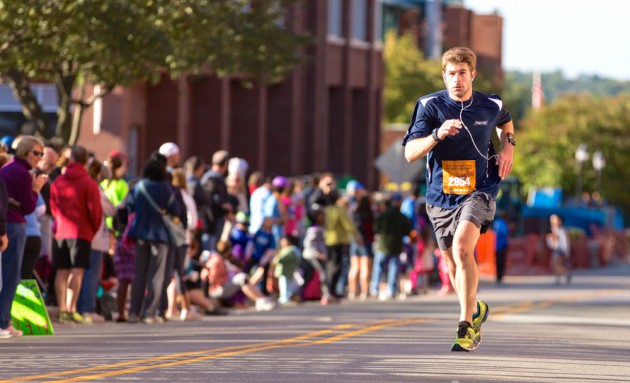 Thirty-one year old Mike Principato from Chapel Hill, NC, works for Biogen Idec and has been running recreational races since college. He loves the encouraging community of running clubs.

“We are mostly amateur runners at different paces, fast or slow is just perspective there’s always someone faster,” he says. “So training with someone who has never run a half or full and seeing them cross the finish line for the first time brings a sense that I’ve truly helped someone surpass their own expectations! This mentality helps me push my own pace too! Running is self-empowering, that’s what I see when someone completes their first race and DOES something they thought they could NOT! Running is its own reward.”

Principato likes mid-distance races in the 5 mile to half marathon range but, runs an occasional marathon when he feels competitive. He lists the 2013 Grandfather Mountain Marathon as the hardest race he’s done.

“The night before me and four other running clubbers, who I dragged with me to the race, camped overnight in solid pouring rain,” said Principato. “Despite all that, and the steepest marathon Ive ever done, the mountain view was so serene and beautiful, it felt enlightening! Then the race finishes at the Highland games where all these hammer throwers and javelin tossers are cheering for you! It was one of my favorite races.  After that me and my friends enjoyed the weekend exploring Boone.”

Principato ran the 2013 Bull City Race Fest & Food Truck Rodeo with a lot of co-workers from the Biogen Idec running club. Seeing two of his colleagues finish their first half marathon made the race a memorable experience for him.