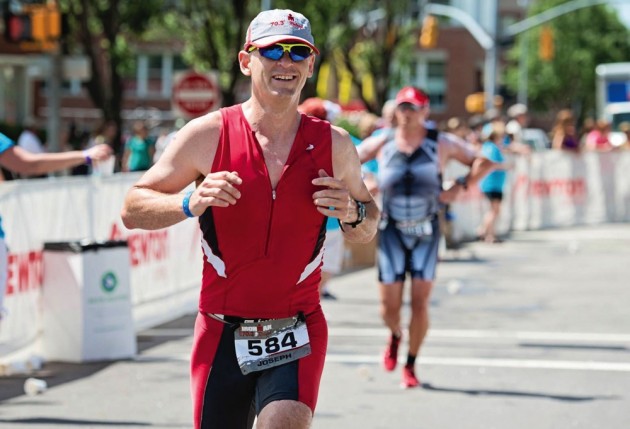 When I passed the paramedics toward the end of the Rock ’n’ Roll Raleigh Half Marathon course, I thought that behind the white screen was a runner who had fallen and possibly broken a bone. I was deeply saddened to later learn that that runner, Jason Schlosser, as well as another, Derrick Myers, had died during the race. My thoughts are with Jason’s and Derrick’s families. It’s truly disheartening to see this happen in a sport I love, and more significantly, it’s tragic for the families.

While I typically prefer to run smaller local events, I felt like I needed to check out Rock ’n’ Roll Raleigh, as it has been a long time since I’ve participated in a larger race, not to mention that I’ve never participated in a race with live music. My expectations were set pretty high for Rock ’n’ Roll Raleigh given the amount of money the city spent to bring the event there. I have to say, without a doubt, that RnR met all of my expectations for a big race: a beautiful course, amazing fan support, a great expo, great post-race activities, and unfortunately, traffic back-ups, which honestly was no different than what I experienced at the well-established Richmond Marathon a few years ago.

The course included the best of both city and countryside views in Raleigh and despite the hills, offered lots of shade. There were also clearly marked medical tents every two miles, each followed 0.2 miles later by well-staffed water points. The course passed many points of interest, including the Raleigh Convention Center, both Nash and Moore squares, Shaw University, Chavis Park, Historic Oakwood Cemetery, William Peace University, Cameron Village, PNC Arena, NC State and the Dorothea Dix campus, where the nonprofit “Wear Blue to Remember” set up an awesome memorial to a few of our country’s fallen warriors. While I would have enjoyed fewer hills, the number and their length weren’t a surprise to me, as I live in Raleigh, where it takes extra effort to find some place flat.

The crowd support was amazing, especially at Cameron Village and the finish. I had never done a race with live music, nor had I wanted to, but I have to admit it provided a real boost while running. I especially enjoyed my post-race beer but wish it had been a local brew (like what we offer at the Bull City Race Fest & Food Truck Rodeo, http://bullcityracefest.com – hint, hint). Afterward, a few friends met us at the Red Hat Amphitheater and we enjoyed a few more beers and music before calling it a day. It was a great event!

While I loved the race, I was simply blown away by the expo. As at most events, there were lots of good sponsors, booths and giveaways, but RnR added their own amazing registration stations where you could get deals for signing up for more races on the spot. And then there was Brooks Running’s tropical-themed expo area, complete with a wall-sized volcano called Mt. Crackatoe-A, which was actually an amusement park-like game. At the base of the volcano were three sensors that runners could run in place on to move a mechanical runner up Mt. Crackatoe-A. It was just the over-the-top type of experience I expected from a RnR event. There was also onsite video gait analysis. Did I mention the mechanical sneaker you could ride? Over. The. Top!

I thoroughly enjoyed the expo, the race and the post-party and believe most in Raleigh felt the same. My non-runner friends who met us at the amphitheater thought it was amazing, too. Two weeks after the race, our own Tar Heel 10 Miler Presented by CEP saw a record 6,200-plus participants. A few weeks before Rock ’n’ Roll Raleigh, the Tobacco Road Marathon had more than 3,400 participants. Those numbers seem to support what I have believed all along: We have an awesome community of runners here in North Carolina who are passionate enough about running to support any and all events that come our way.