It takes a total badass to become a professional triathlete. They are a breed unlike any other. They are strong, dedicated, driven, relentless and passionate about their sport. Few can fathom the commitment it takes. Their pain thresholds are off the charts. “Success in the sport is, above all else, about enduring suffering’, says professional triathlete Chris McCormack, the Aussie winner of the Ironman Triathlon World Championships in 2007 & 2010. Two-time marathon winner Sika Henry is very familiar with that pain. She is a stone cold badass of the highest caliber. And she’s just getting started. Triathlon has given her the platform to make a difference.

Triathlons have grown exponentially since the 1980s. What started out as simply cross training for runners has morphed into a worldwide sport movement. There are races around the globe including the legendary Ironman race series, the worldwide ITU Triathlon Circuit and the Xterra Racing Series. On the event side, the number of races sanctioned continues to climb according to USA Triathlon. Those numbers have nearly tripled over the last seven years. By the end of 1999, membership stood at 127,824. Today, one day memberships number over 477,000. 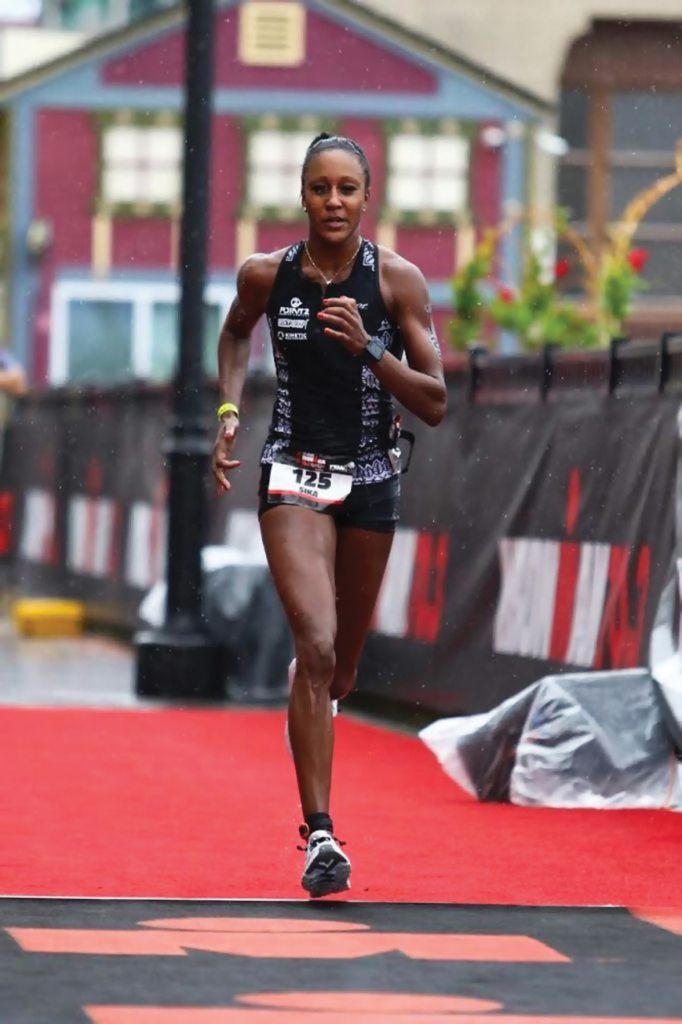 Yet, according to USA Triathlon, less than 0.5% of triathletes are African American. However, that’s not the only burden Sika is facing. According to the USA Swimming Foundation, 64% of African American children do not know how to swim. Black children ages 5 to 19 drown in swimming pools at a rate more than five times compared to that of white children according to NBC News. Sika Henry is out to change these statistics. Sika took part in swimming activities and practices all 4 years in high school. “I was almost always the only minority at every high school swim meet I went to. I never quite felt comfortable. I always stood out,” she shared with Endurance. Part of her mission is to bring to light the lack of swimming skills that have been caused by racial discrimination and segregation at swimming pools. She told me, “Hearing figures like ‘~48% of African American adults are clinically obese’ and ‘nearly 70% of African Americans lack basic swimming skills’ is crazy. These are preventable. Sports like triathlon can be a great way to combat these disparities.” 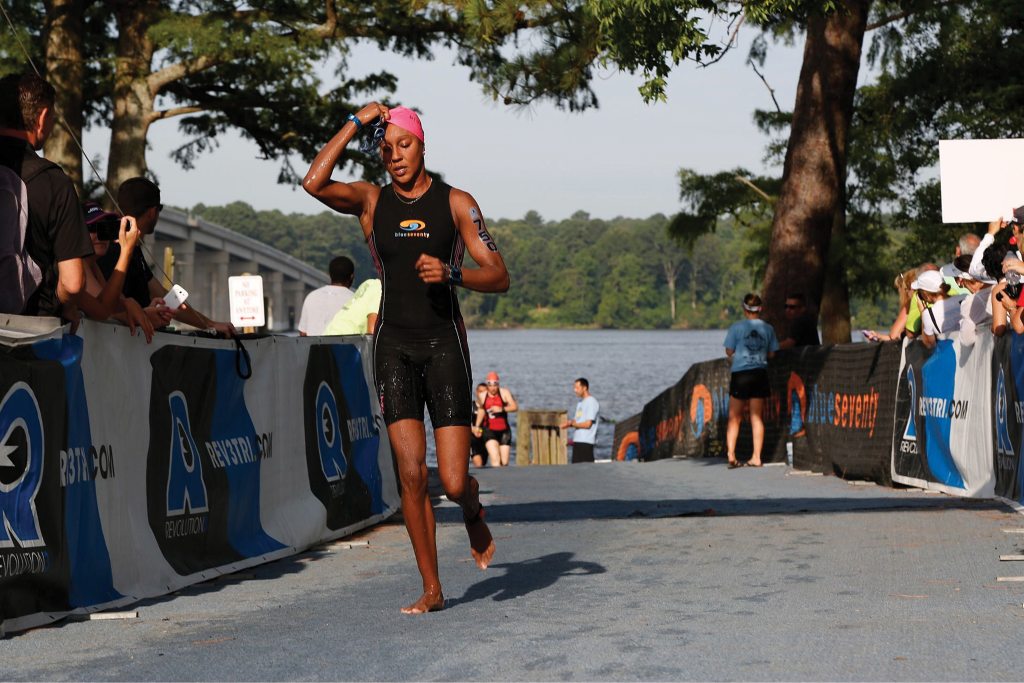 At 35 years old, Sika Henry is a commanding athlete standing at a striking 5’10” tall. Her slight frame weighs in at 136lbs. She was born in New York but grew up in New Jersey. She was exposed to sport at an early age and her skills run the gamut from gymnastics to softball and swimming. Having a large, in ground pool at home helped Sika get her swim gills early.

Sika attended Tufts University where she graduated with a degree in economics. She is employed by Ferguson in Newport News as a Project Manager in Marketing and Analytics. Trying to balance a full-time job and 17+ hours of training each week is an immense undertaking. Sika sneaks in workouts when she can. “I’m extremely blessed to have an understanding boss who allows me to train on my lunch break. I also work remotely a few days a week.” “There is nothing more satisfying than seeing hard work pay off.” says Henry.

She was a collegiate high jumper and ran track during her tenure at Tufts. Her list of athletic accomplishments is long. She is an IRONMAN 70.3 All World Athlete (Gold), USA Triathlon All American and qualified for the 2019 IRONMAN 70.3 World Championships. She has won two marathons, broken records and helped bring attention to Hampton University’s recent addition of triathlon as a female varsity sport. It is the first historically black university to do so. Her running PRs are 5k 18:19, half marathon 13.1 miles 1:26:57, marathon 26.2 miles 3:00:06. Sika recently signed on to the In and Out Express Care’s Elite Racing Team. 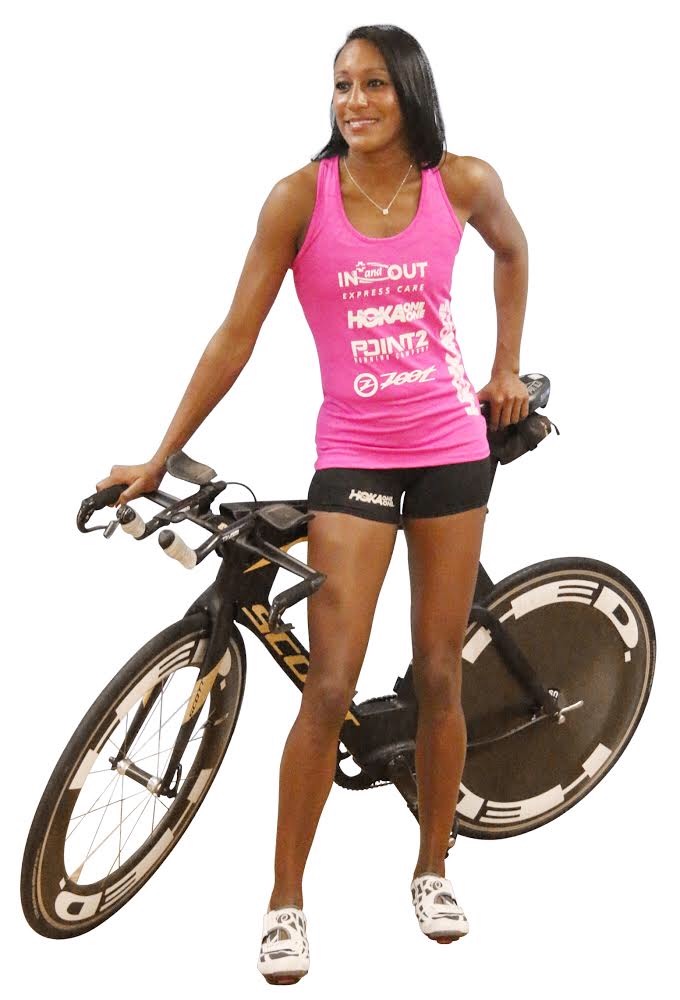 This trail blazing athlete is making a bid to become the first African American woman to get a professional rank in the sport of triathlon. To get her pro card, she needs to finish in the top-3 overall in the amateur field at an Elite Qualifying Race. “I think it’s such a wonderful sport that I’d like to see more popular amongst minorities, it’s not a fad or a quick fix diet. It truly is a lifestyle. It teaches you patience, makes you more disciplined,” said Sika of the sport she loves. “Sika has been one of the leading advocates for generating more diversity in the sport of triathlon. As with any sport, increasing awareness and decreasing barriers for entry at the local level is key for building a more diverse population within the sport,” says Adam Otstot of Team Snapple and In And Out Express Care’s Elite Racing Team.

“Sika is the classiest example of an athlete with big dreams that stays humble and works hard to accomplish them,” said Otstot.

More success seems certain for Sika. It is inevitable. After all, in the Ghanian language, Sika means Gold.