I choose to start my story on May 10 of 2014. It could just as easily start six months later, with that first visit to the doctor. Or, with the colonoscopy that soon followed. But, as it turns out, that was the day I started training.

For weeks, one of my oldest buddies (nicknamed “Au Pair”) had been leaning on me to join him for one of his F3 workouts. So on May 10, 2014, a Saturday morning, I was among 38 guys who showed up at a park in Durham at 7:00 a.m. for an hour-long, boot camp-style workout. At your first F3 workout, you are given a nickname decided upon by the group after you share a little bit about yourself. I was subsequently named “Lo Pair”. Apparently, my mistake was standing next to the considerably taller Au Pair as I explained to the group how I had come to be standing with them that morning, drenched in sweat, still trying to find my breath. 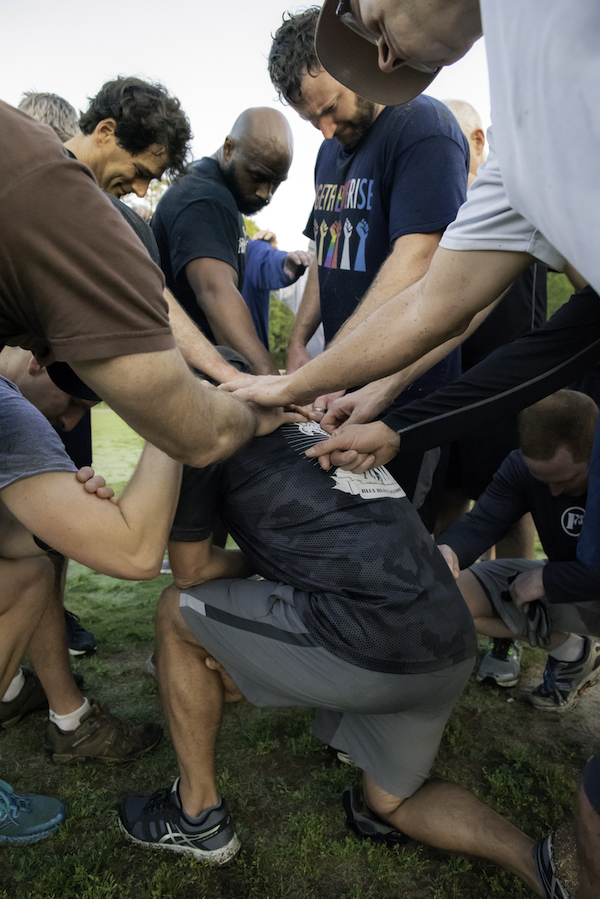 The hour had consisted of a warm-up followed by a jog to some nearby playground equipment, where we lined up and did multiple sets of various bodyweight exercises, all to a cadence count. As the leader (“Adolphus”) called exercises, two men would fall out of line and knock out 10 pull-ups on the playground. (Like most, mine were partner-assisted.) Exercises included squats, jump lunges, push-ups, slow push-ups, shoulder press push-ups, flutter kicks, burpees and the like. Once everyone had a turn at pull-ups, the group ran back to the starting point where our leader (now “Riggs”) called various planking exercises and other core work. This was then followed by several different sprints (bear crawls, gorilla walks and flat-out sprints). We finished with ab work (various flutter kicks and leg lifts). I learned later that someone “splashed merlot” (threw up) at some point during the workout, but also that they came back and finished. It was hard. As it turns out, it was typical.

F3 is a national network of free, peer-led workouts for men [there is a sister organization called FiA, for women – see box]. Those three Fs stand for Fitness, Fellowship and Faith; the latter defined not with respect to any specific religion or faith system, but simply a belief in something outside oneself. The core principles of F3 are that workouts are free of charge, open to all men, held outdoors regardless of weather conditions, led by men who participate in the workout in a rotating fashion with no training or certification necessary, and ending with a “Circle of Trust” where that day’s leader (we call him the “Q”) offers a few words of thanks, prayer, or whatever moves him. The F3 credo is leave no man behind, but leave no man where you found him.

Initially, I thought of myself as a “Saturday-only” guy; 7:00 a.m. on Saturday was early enough; there was no way I was getting up before dawn for a 5:30 or 5:45 a.m. weekday workout. But those who are in F3 have heard the story countless times. After a couple Saturday workouts, “Coco” asked if he’d see me Monday. I said, “yes, why not?” and that one step was all it took.

That first summer and fall I typically I hit three workouts a week. By September 2014 I was ready to step up and Q my first workout. It’s a cliché in F3 circles, but by then I was in the best physical shape of my adult life. I was in training.

I don’t remember exactly when, but at some point I noticed some blood in my stool. It wasn’t enough to cause major alarm, but just enough to notice and cause me to think that I should get it checked out. When I did, the primary care doctor ordered a colonoscopy. On Oct. 23, 2014 the colonoscopy revealed a tumor. The doctor felt certain (she was “99 percent sure”) that it was cancer. The hope was that it had not metastasized.

Cancer in the colon is serious, but if it has not spread it also is very curable. The surgeon can go in and do a resection of the colon (removing the portion of the colon containing the tumor) and, sometimes with chemotherapy as well, patients often are completely cured.

The doctors scheduled a CT scan for the following Tuesday to look for evidence of cancer outside the colon. Two days later, my wife Carey and I met with the doctors to learn the results. We learned at that meeting on Oct. 30, 2014 – my son’s 10th birthday – that the cancer had indeed metastasized. The CT scan revealed several small spots, fairly evenly distributed throughout my liver. Stage IV. I was 41 years old. Our children were then 12, 10, and 7 years old. This was not a part of the plan.

The next Monday, Nov. 3, I hit the regular F3 workout at Fetzer, along with 28 others. “Shooter” had the Q and, as usual, it was a beat-down. Following the workout and before the Circle of Trust, I shared my news with my F3 brothers. The support was immediate, and complete. I could literally feel the healing touch of 28 brothers, as we gathered to offer thanks.

Like brothers will do, I soon started getting e-mails and texts. A box of books showed up at my door, along with some ginger mints (for chemotherapy). A link to an audio book showed up via e-mail. Cards and letters arrived. Visitors showed up during infusions. The guys got together and ordered several F3 hoodies with the letters “LP” (for Lo Pair) emblazoned on the sleeve. I have two. At the last workout before my first surgery, more than 50 guys converged on Fetzer to send me off.

Since my diagnosis, I’ve had 16 rounds of intensive chemotherapy, three major surgeries and countless minor procedures. For the first 10 rounds of chemo in 2014-15, I was fortunate to be eligible for a study at UNC where I received two times the typical dose. I am certain that my physical fitness allowed me to tolerate the higher doses. After all, like all of us in F3, I’m training. In 2015, I had 12 centimeters of my colon and two-thirds of my liver removed, in two different major surgeries. In 2016, I had a wedge resection of a suspicious (but as it turned out benign) spot on my lung. I’ve had countless other procedures, from insertion of a port under my skin (still in place today, this is used to administer chemotherapy), to CyberKnife radiation, to surgical ablation of a spot on my liver in 2017. The most recent six rounds of chemo (ending in February 2018) caused intense nausea and fatigue and, strangely, extreme sensitivity to cold.

F3 has been a constant, throughout.

Over the past few years it has been difficult to avoid living life in three-month intervals, going from one MRI to the next. The good news is that the most recent scan was clean. I try to force myself to think a little longer term. We continue to have hope. We plan to win.

It’s funny to me that I’m writing this for Endurance Magazine. I work out at F3 with guys who are truly world-class athletes (in addition to holding down day jobs). They have done Ultra Triathlons (“Yanni”), run the New York and Boston Marathons in under three hours (“Ito”), can bear crawl as fast as I run (“Spooky”), have biceps the size of my thighs (“Moore”). F3 guys have completed multiple light, tough and heavy GoRuck challenges. We have rucked the 22.6-mile length of the American Tobacco Trail. F3 annually has dozens of teams competing in the Blue Ridge Relay, and mud runs are regular events. I work out with a guy who is 72 years old (“Stevie Ray”). More impressive in many ways are the guys who can’t run a mile when they show up for their first post, and who work for months and months to change their bodies. No one is left behind.

Sometimes life throws us curveballs. How we respond is up to each of us. I have come to believe that it was not an accident that Au Pair dragged me to that first F3 workout. While I do not subscribe to the prosperity gospel (everything does NOT happen for a reason), I now understand that F3 filled a void in my life that I didn’t know was there. In addition to whipping me into shape physically, I’ve found a new group of friends – brothers – who support and encourage me (and who make fun of me). And I try to do the same for them as they are going through their own battles.

This May marks four years of F3 for me. This October will mark four years since my cancer diagnosis. I’m continuing to work out regularly. I have tolerated the chemo. I have recovered from the surgeries. My F3 brothers are encouraging me, and I am encouraging them. We all are in training. Some of us train for the Blue Ridge Relay or a mud run. Some train for a GoRuck or a marathon. Some don’t know yet for what exactly they are training. Since May 10 of 2014, it turns out I have been training to beat cancer. I am fighting the battle, in the only way I know how.

My cancer story starts not with my diagnosis, but with my first post at an F3 workout six months earlier. That’s when I started training. I’m still not sure when or how my story will end. But I know this, with absolute certainty: in addition to the support of my family and friends, my law partners and other colleagues at work, and in addition to the incredible care from my doctors and nurses at the UNC Lineberger Comprehensive Cancer Center, for me beating cancer will not be possible without F3.

Thanks to Ben Sherman (“Marky Mark”) for editing help, and for being there with me in the gloom for the last four years, and to the rest of the Chapel Hill and Durham Pax, for the same.