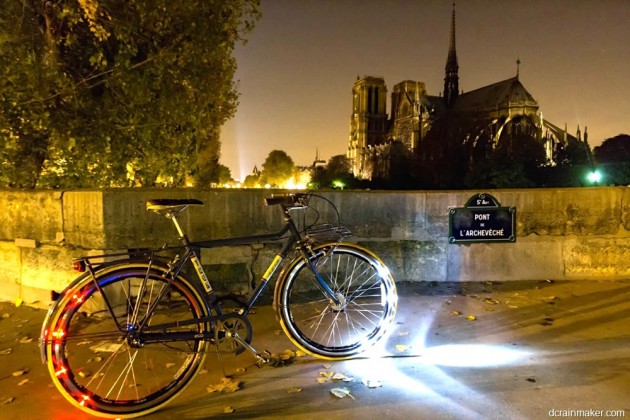 I don’t have to tell you: It’s dangerous out there for those of us who love cycling. In fact, nearly 1,000 cyclists are hit by cars on North Carolina streets each year. But what should be done about it? I asked two of my best contacts in the cycling business for their thoughts.

“My No. 1 priority would be clean bike lanes,” said Dave Naderman of Cycling Spoken Here. In places where the infrastructure for bikes has improved, not only are cyclists safer, but the economic return on investment is huge. For example, the Outer Banks made a one-time $6.7 million investment in its bicycle infrastructure—31 miles of wide paved shoulders, marked bike lanes, and about 25 miles of greenway trails and side paths. The NCDOT estimates that the region sees an annual 9-to-1 return on that initial investment.

Jeff Hutchinson, owner of All Star Bike Shops, agrees with the need for better infrastructure, but also advocates more education for motorists and cyclists. “Cyclists need to be comfortable on their bikes, have good rider skills, and act predictably.” As for motorist education, North Carolina launched its 2014 “Watch for Me NC” campaign in late August. This program, which runs through November, includes motorist education and local police crack-downs of traffic violations that put cyclists at risk. (watchformenc.org)

Unfortunately, there will always be negligent drivers and less-than-optimal road conditions for perfect bicycle safety. That means we have to protect ourselves the best ways we can by making ourselves as visible as possible. Here’s a rundown of some of the best options for being seen:

Mission Bicycle Company has come up with an ingenious way to help riders be seen at night—a retro-reflective coating built into the bike itself. This is the same type of light bounce-back that makes a cat’s eyes glow. During the day, the Mission Bicycle Lumen is a slightly iridescent charcoal gray. But there is also an embedded reflective material that causes the bike frame and rims to glow at night when hit with direct light (such as from a car’s headlights). You can buy a frame set, whole bike, or wheelset directly from the San Francisco manufacturer. (www.missionbicycle.com/lumen)

If you don’t want your whole bike lit up, how about just the wheels? With its motto of “Be More than a Dot in the Dark,” Revolights promises full 360-degree visibility via a unique lighting system. The designer wanted to place a headlamp as low on the bike as possible to illuminate rough roads. What he created instead is a kind of strobe-looking series of wheel lights that throws a wide swath of white light in front for the cyclist to see both high- and low-level objects, while the red lights at the back also function as brake lights. Best of all, the LED lamps on the wheels can be seen by drivers on all sides of the bike. (Revolight.com)

There has been an evolution in lighting technology that makes it worthwhile to upgrade your front and rear lights. Now, thanks to ultra-bright LEDs, a cyclist’s lights can be seen even in full daylight. Some even have different strobe modes so you can have steady light for night riding, or full strobe for optimal daytime visibility. Some of the lights are designed to also be seen from the side. Two top-quality brands available locally are Cygolite and Bontrager. They come in a variety of models that range in price, some as low as $20, so there’s no excuse for not having the best lighting possible. (www.cygolite.com; www.bontrager.com)

Remember the little “ring ring” bike bells we had as kids? Well, now there are bike horns that are the Godzilla-version of that little noisemaker. AirZound Horn by Delta is advertised as the world’s loudest bicycle horn—115 decibels. That’s louder than many car horns. “We don’t let people test it in the shop,” said Naderman. “It’ll make you lose your hearing for awhile.” But that’s exactly what you want if a car starts drifting into your lane or making an unsafe turn. Most drivers react by looking around (finally!), and stopping whatever motion they were doing before the sound … just as with a car horn. Because this is an air horn, no batteries are needed—just refill it with any bike pump. (deltacycle.com/airzound-horn)

And although it’s not as sexy as these other gadgets, I just can’t end an article about safety equipment without mentioning helmets. Please wear one … and ride safe.

Thank you to Jeff Hutchinson of All Star Bike Shops (allstarbikeshop.com) and Dave Naderman of Cycling Spoken Here (cyclingspokenhere.com) for sharing their knowledge of all things related to bicycles!

Thomas Henson Jr. is an avid cyclist, and finds much happiness in bike rides with his family and friends. He leads the complex injury litigation department of HensonFuerst Attorneys. He can be contacted at ThomasHenson@lawmed.com.