FEATURE – Of Mud and Men (and Bikes!)

FEATURE – Of Mud and Men (and Bikes!) 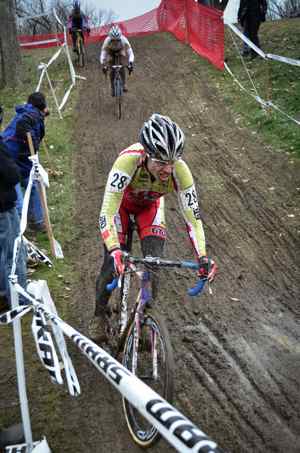 Mud-caked, frozen, and struggling to keep the rubber side down, I pushed on to finish the race, but many minutes behind and in 26th place. I overheard the announcer through the leafless trees on that Ohio River bank: ”Scott Frederick is your new Masters 35-39 world champion!”
A big smile across my face, I wondered how he pulled it off. He was 10-15 seconds down at every turn that I could steal a glance to see how he was doing. We both knew that starting this race he did have a chance of winning it. He finished first in our heat races the day before so I knew it was in the cards, but to have it actually happen was a great surprise.

Driving home from Louisville, Ky., that weekend, I reflected on the experience of the long weekend of cyclocross racing. Jimmy Bruner left shortly after working the pits for Scott. He, having placed 10th in the very competitive 45-49 race earlier in the day, told me he wanted to drive a few hours to West Virginia, grab a hotel, and sleep for five or six hours, only to get up around 2 a.m. and drive the remaining six hours home so he could see his two young daughters before they got up Sunday morning.

These Masters racers are a unique group of athletes. Jimmy’s late-night drive home to see his girls wake up and Scott’s win ignited my interest in getting this story out.

Q:  What were your highlights of the season?

Jimmy: Hearing my girls yell at me and ring the cow bells at the races was my biggest highlight this season. That really pushes me to dig deeper.

Racing, I think winning the overall NC Cyclocross Elite Masters series and having the announcer describe it as a “dominant win.” That really felt good to win!

Q: You mentioned to me once you are getting stronger by the year. Most of us peak much younger. How do you explain this as a 47-year-old?

Jimmy: It’s simple: coaching, bike fit, nutrition, and rest. This is the second year of a completely organized coaching [program]. Second, I went to Carmichael training and had Andy Applegate do Retuel fitting for my cross and road bikes. This was probably the best money spent the entire year. I also lost about 8 pounds.

Q: I know you maintain a pristine diet. Tell me about that.

Jimmy: Part of the motivation is to keep healthy and have good life eating habits. Secondarily, I want to promote healthy eating to my girls.

I keep it simple: mix in protein, healthy fat, and carbs with every meal or snack.  I also try to eat based on the training activities. So, as the volume or intensity goes up or down, I shift towards more complex carbohydrates or increase protein for recovery.

Q:How do you stay away from dietary pitfalls?

Jimmy: Staying away from junk food isn’t hard for me because those are not the things I crave. I detest fast food. I also limit my alcohol to just a beer on Sunday evenings as a close to the weekend.

Q: How does your training and racing mix with your personal and professional life?

Jimmy: I would say it was pretty smooth. My family support my goals and ambitions. [My wife], Michelle, was training for the Marine Corps Marathon during the summer. She would have the morning to work out and I would have the afternoons between work and dinner. In July, that meant I had to ride in the heat of the day. The goal was always to sit down for dinner as a family.

At work, my teammates know my goals and are supportive. I have flexible hours at work. My recent finish at Worlds was published to the GSK website. That is good support.

Q: What were your biggest family challenges this season?

Jimmy: There were two things: swim meets for the girls and training while on family vacations. Some vacations I don’t even attempt to train, such as our annual beach trip. For most other vacations, the bike travels along and I just get up early to train.Swim meets are a challenge because they run long and if it storms then it gets postponed or rescheduled for the next day.

Jimmy is truly a cool character. At races, he’s got a stout pre-race routine and a relaxed “Hello” to all the regulars. He is consistent with his results week after week in cyclocross, which is challenging given the intense nature of the event. And, to find that behind all this is a devoted family guy who just wants to get home to see his girls – this really demonstrates a high level of balance enviable of any weekend warrior or state champion.

Back at the awards ceremony in Louisville, the podium announcer confirmed Scott’s world championship win and announced Scott’s dedication of his win to the team’s owner and Masters cyclocrosser, Jim Edwards, who was diagnosed with, and is recovering well from, leukemia. Jim’s Inland Construction Co. has been the main sponsor for Scott’s elite/Masters racing for many years.

Fast forward through the evening, several pizzas, and several adult beverages later. Scott still dons his blue long-sleeve rainbow jersey and gold medal around his neck. We’ve been out late with other winners from Belgium, Ireland, Germany, and way too many racers from Colorado (they were dominant!). As we said our goodbyes, I asked Scott if he was going to sleep in his world champion’s jersey tonight. Wild-eyed and with a Cheshire cat grin, he agreed that he would.

Q: Scott, what were the final meters of your championship race like?

Scott: My main competitor, Chris Chase, out of Golden, Colo., dropped his chain while going into the last section of the course. I caught him at the top of the last run-up and we remounted our bikes together. I entered the last turn on the inside and he, outside. Hitting the pavement first, I sprinted in my small chain ring finishing just three seconds ahead. It was the most amazing feeling I’ve ever had on the bike. I was overcome with emotion and exhaustion. I was pretty happy. I did try to smile, but my face was too frozen to show much expression!

Q: In the eyes of the UCI (and many of us locals), you are now a part of a very select group of riders as a world champion. Has it affected how you see yourself in the mirror?

Scott: I want to share my experiences with the next generation of riders and even reach out to those never exposed to cycling. I never had a mentor at a young age when I started in cycling. I know how important they are. We all have a responsibility to show that winning is not only self-serving, but a means to bring others into the sport and share with those that have world championship dreams too.

Q: What has been your greatest challenge this season?

Scott: I would say my greatest challenge is being patient and overcoming an illness in August and September. I picked up giardia on my trip to Brazil and Rocky Mountain Spotted Fever from a tick bite shortly after. I was so weak for nine days in a row that I thought my season was over. After a few pep talks with my girlfriend and other riders, I decided to stay focused on the upcoming season. I owe a lot to my friends and family for being there through all that.

Q: How has your travel and racing affected your life professionally and personally?

Scott: Being an elite athlete, a best friend, a business owner, connected with friends and family, and a well-rounded person is hard to balance. Balance is the appropriate word here and is most important. I’m happy to be doing this later in life too, after college, starting a business, and figuring out what I want in life. I’m always learning from the sport and how to be a better person from it. Ultimately, your own choices determine whether you succeed in the long run. The traveling does get old sometimes, but having three pillows to choose from at some hotels is a bonus!

What we all want are choices. These choices will determine what is next for all of us … a world championship, fatherhood, friendship, love, a new career. This is the power to guide us into the future, whatever it becomes. These men are not looking in the rearview mirror for affirmation but 200 yards down the road anticipating the next move.

Joshua Stevens, D.C., is a holistic chiropractor in Chapel Hill and Durham, where he utilizes chiropractic, acupuncture, detoxification, nutrition, and cold laser therapy with patients. A two-time Ironman finisher, he focuses on racing cyclocross and mountain bikes … much easier!